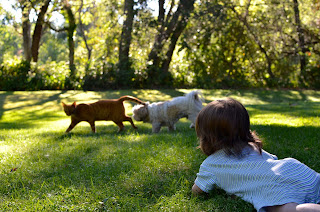 Relationships are difficult, at times impossible. Everybody knows it. But very few people that I know want to be alone. It is a state that they might come to accept, but they do not seek it for long. It is not their preference, mostly. People might want peace from their relationship but they also want the relationship to return to once they have enjoyed some tranquility, some privacy, some space.

Babies change everything. All efforts are somehow for the baby, even mine and Rachel's love for one another. Never before in my life has there been such a complete and thorough loss of the self. I have done supercharged psychedelics, ones in which there seems to be a complete shedding of the ego. Even these heavyweight hallucinatory chemicals do not compare to the perpetual stripping away of the self that occurs with a baby. It is as if paint thinner has been applied so consistently, and so evenly across the surface of self, that all the paint has been removed and now the wood is being sanded down far past its original form. A different object will be the eventual result. That much is clear.

I've been told that it comes back, the self, though in a vastly different form. Some say, "Improved!," and that it becomes easier to separate what matters from what does not. But I suppose I wasn't quite prepared to shed off all of the the things that didn't matter about my life yet. Also, I did not realize that my wife would appoint herself as the supervisor of this project. It becomes tedious. Nobody wants their love to be tiring, without adequate escape, or relief. It is not Rachel's fault, her body has released a set of chemicals which instruct her to instruct me. There is no negotiating with it, no way to reach the woman that I fell in love with. Talk is useless. Men just learn to hide, when they can. It's as if you've just discovered masturbation again, but without the joy, there is only the need for occasional privacy, a closed and preferably locked door.

"What are you doing in there?"

The old path to the waterfall is nothing now but well worn shortcuts.

I have been going to the gym, trying to rebuild where there has been much loss, trying to regain some of the shape of my youth. Even if it is only form, I hope that it might be enough to fool me. If I can fool myself then maybe I can fool others.

I want to take a vacation, anywhere. I want to get out of this new life for a moment. I don't want to abandon it, but I need a break from it, a reprieve. It is not Rachel's fault, but her sensing my feelings in this regard doesn't help anything. She doesn't seem to understand how or why I would feel the way that I do. Mothers' emotional sensors are hyper-trained on their husband's dissatisfaction through this stage, but not so that they can help with it, but rather so that they can turn up the volume on their concern, and needs, only compounding the issue.

That is what is happening. She needs me more than ever, and her expectations of me double or triple right along with the child's weight and height, but there is less of me left over to help. I have vanished into a different life, one that doesn't need me the way the old one did. I see now why men talk less and less as they get older and women talk more and more. The reins of control shift. Many men hide in their jobs, dedicating themselves to that as a substitute for love. Their version of love becomes almost exclusively "providing," a thing that can be questioned by no one. Capital representing self where self alone was once sufficient.

It's true. I need a job. It feels as if that would solve part of the problem. But I know what it does instead. I have seen the effect of it. It can be a productive place to hide if one is not careful. Or, if hiding is what one prefers.

I am happiest when I am taking care of the baby on my own. I know what I am doing and there is only the joy of interacting with the boy. I can't seem to figure out why it becomes something so different when we are all three together, four including Barkley. Suddenly I am not a father, I am only a mother's assistant. It is not even Rachel's fault, it is occurring on some level that I do not believe she has much control over. I can intuit the deeply hormonal nature of it. Fighting with hormones is like taking on the winds from all directions with karate. You will only tire yourself out, look foolish, and never, ever win. Never even draw.

Yesterday we got a ticket for having Barkley in the park. It was a total bullshit ticket and the cop didn't have to write it. Rachel's explanation for what was happening should have been adequate. She was waiting for me, only one foot over the line of the sidewalk on the grass, in the shade, directly in front of her car. It was too hot to wait for me in the car with the baby and the dog, or on the sidewalk in the sun. Any human could have seen that she was telling the truth. I arrived as the cop was talking to her, corroborating the story that she was merely waiting for me to go to lunch, but the evil fascist fucker wrote her a ticket anyway. It ruined our day. Rachel cried with frustration and the cop is just standing their apologizing for doing the thing he could have just as easily chosen not to do.

We don't walk our dog in the park, others do. We don't because we don't want to be the type people here (there are many of them) that think the simple rules don't apply to them, flaunting their breach in everyone's faces. Rachel crying was almost too much for me. I wanted to choke the cop to the ground and watch his eyes roll into his skull but immediately thought better of it.

I mean, I thought of better ways to accomplish the same. I envisioned Barkley suddenly growing into a 15 foot tall Shih Tzu and snapping him up by his head, spinning him around like a cotton chew toy, watching his arms and legs flail, hearing his screams and pleas emerge from within his jaws as they crunch down on his spine, which only served to excite the playfully monstrous dog even more. Bones snapping, the spine and extremities falling limp, etc.  Pure "Clash of the Titans" stuff.

I think that's what I wanted anyway. Something along those lines. Instead, when he asked that Rachel sign the ticket I called to her and said, "The juggernaut of bureaucracy needs you. The stormtrooper of the paperwork apocalypse will not rest until you've acknowledged your crimes against humanity."  Well, I said the first sentence, thought of the second after we were already walking away, with me assuring Rachel not to worry about the ticket, pissed that I hadn't thought of the second sentence sooner.

Somewhere I must find some new strength, some new sense of self. I must see a different creature in the mirrors at the gym.

I will go today and look at my reflection, speak to myself about becoming something new, forcing the change to happen at great personal effort, and painful repetition. I must recapture the Eye of the Liger.

I will approach the mirror, staring deep into my own eyes and whispering to myself, "Move, you fat motherfucker....Move, before it's too late."