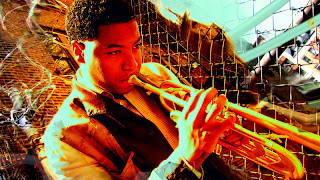 I love jazz. I often try to play it for people when they come over. So many of them look at me as if they've maybe done something wrong, wondering why they're being tortured. But last night Rachel made a suggestion that she recorded on her phone, off the radio. I downloaded it, and voila... magic. A jazz album that I can play for people, one that I like and one that they won't find offensive. A rarity.  Of course I'll end up having a few glasses of wine while its two cd's play through and by the end of it I'll be putting on the heaviest electric psychedelic Miles I can find and the party will be, as they say, over.

The album is "Christian aTunde Adjuah" by Christian Scott. Anyone with even a passing interest in jazz should check it out. Here is the single off the album.

Ok, the weekend is ahead of us. I must go to the gym, then decide on some family activity of some sort. We're looking forward to it. We've had so many guests, for so long, that it's nice to finally have a weekend to ourselves. I have decided to have pork for breakfast, after the gym, to maintain the necessary balance of life.

I will put Christian Scott's album on my iPod and push my heart to the breaking point, demanding that my legs and arms do things that they currently can not, that they will not, issuing stern orders from the center, my lungs aching for mercy, drenched in sweat, my eyes fixed on the wall, repeating a single word over and over.