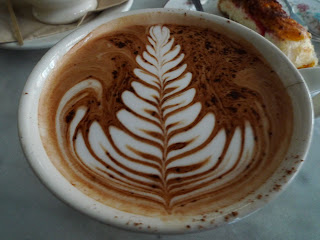 Rachel sent me on an errand to the grocery store this morning, to get coffee. I followed her instructions perfectly and arrived back at home with the coffee she requested. Once she had poured the ground coffee beans into the maker she realized the bag said "decaf" on it. Why do they even sell that in the same section as the regular coffee? Scratch that. Why do they sell that at all? It is an awful lie.

Luckily, I had bought two different types of coffee. The other one, the expresso blend, was as nature intended it to be. I'm waiting for that to seize my mind and body now, constricting my arteries like a circulatory boa.

I found a great bookstore in Santa Rosa (the first "city" northwards up the valley). It's called Treehorn, I think. It's all used books, mostly hardback, and relatively cheap. It must be owned by an old, wealthy, eccentric of some sort. It sits directly across the avenue from a monstrous Barnes and Noble. There were only one or two other people in the whole store. It's difficult to understand how it's still operating. I went in and found a few books that I had been meaning to get, or replace. Two hardback and one paperback, all in perfectly new condition. $30. Voila.

One is a collection of essays by Gore Vidal, "Homage to Daniel Shays." If you have never read any of Vidal's essays; well, I enthusiastically suggest them. His writing is enviable, his historical perspectives are acute and fascinating. More than all of that is his clever turn of phrase. His timing is precise.

The essay that gives the book its title is the first one I read, the last written chronologically, in 1972. It is amazing how perceptibly he described and predicted our current economic-political condition from a vantage point 40 years distant.

The other two books were replacements for ones that I had given away, a collection of poetry by Dylan Thomas and Hell's Angels by H. S. Thompson, also a lost gift or an unreturned loan.

Selavy, I believe, was poking fun of my purple prose from the other day. It's true, I should not write when up late, drinking. I get the feeling that nobody is watching so it doesn't matter if I allow myself to get silly, thinking myself a late-night west-coast purple-poet of sorts. But the morning always comes, the damage is done. It is out there floating in the aether of the past, like your first true love, the one from high school. It is an un-erasable shame at that point. There are stabs of memory, drunken screaming from the neighbor's lawn. Terrible recollections. It is like that, childish love. Certain lines can be changed or deleted, but the spirit of the thing is too far gone. There have been witnesses, and we must all return to class on Monday morning. Ah well, C'est La Vie... Next time I will use a smaller font size, to minimize the damage.

Drinking and writing, they walk hand in hand. I lose all modesty, like a drunk slut dancing on the tabletops, as if already engaged in some imaginary wet t-shirt contest. Or, believing myself to be a sailor at war, or a lion tamer moonlighting as a talk-show host without guests.

There is only one thing worse than a "young poet"...

I keep seeing people here in Sonoma that I somehow know. Or rather, I should say that I should know. They know me, they know Rachel and the boy, etc. They seem to know all about me.  I will just stare at them, fascinated at the tales they tell of my life. They will try to remind me of when we've met, nodding in self-agreement and clear memory. And I, sitting like a schoolboy around a campfire, gripped by ghost stories, waiting for the next clue... I am hideous. I can't remember names and faces but I have a great memory for things that I've said and people that I've interrupted.

I was texting with Cato yesterday. I think that's who it was... In any event, he was telling me that I have a habit of interrupting people. I was insisting that my time is running out and I can't bear to hear others talk much more, especially when I can tell what it is they are going to say long before they ever say it. It is excruciating.  If you don't interrupt some people then they will drag their sentences out to the very end. It's rude. There really is no other word for it.

Well, there are a few other words for it... But, I get impatient with those who are not more amenable to my interruptions. Likewise, I repeat myself because they appear to have ceased listening. When they are vaguely shaking their heads in the "no" direction I assume that they still don't understand.

Conversation is only democratic at the very beginning. It is proven to be something else as it progresses. Why should I, or anybody else, be forced to endure dull ideas? Cato offered that I am a tyrant, but the opposite is more true. I'm the victim here. It's not as if I'm trying to silence anybody from a distance, or when I'm not present. There should be others for that purpose. We could form a league.

I abhor patience and patient people. I have no time for them. If interrupting people is rude then shouldn't there also be a speed and time limit that should be observed by all those speaking? To go below a certain word-count per minute should be also perceived as a rude waste of everybody's time. Or, to drag one simple idea out for more than a sentence or two... it's uncivil.

Are we also meant to perpetually suffer the dull and unimaginative?

That's it, really. The only people worth listening to are the witty, the people who will say unexpected things. Everything else is like listening to a recording of an endlessly bad sermon, or being forced to read the transcript. You know where it's going, you've heard it before, it is dull and obvious, and all too familiar.

The true weirdos of life: the intellectual hoarders, the explosively nervous, the wandering crazed bums... are perhaps the only ones worth leaning in to hear any more. Never knowing what nonsense will arrive at the end of each sentence, or during. The absurd non-sequitirs of mild dementia. In that there is the true wisdom and perverse beauty of the ages. Not the primitive scrawling on the cave wall but instead the wiping of a fresh, shiny booger. Announcing its arrival to a collective wince of disbelief.