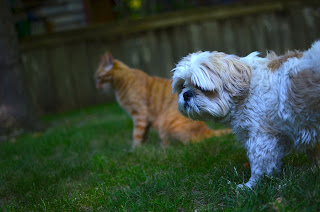 Rachel and I are gearing up to go to battle with the city of Sonoma. We want to fight the ticket that we got for having Barkley, the dog, at the plaza. We realize that it might be a lost cause, but a friend sent an article published in the local Sonoma News that states that even the sidewalks around the central city plaza are a place where they will fine you for walking a dog. There are no signs posted to this effect. There are signs posted that you can not have your dog IN the plaza. They are located on the garbage cans as you enter. But I don't see how they can enforce an arbitrary law that changes from sidewalk to sidewalk without notice or warning. This sort of strategic incompetence should be illegal. That is the argument that I will present to the judge, that he is in league with incompetent criminals.

I wrote about us getting the ticket here, at the bottom of the post.

It is infuriating, the misuse of law for the purpose of generating revenue. I am already working on my statement to the court. It starts out, "Hello assholes and syphilitic hillbillies...."

In truth, I do not know how much time or energy I could possibly devote to such a thing. But the regular abuse of the law for the purpose of generating revenue angers me more than most other things.

Fuck the police, is what I mean.

I just had an errand to run. On my way back from doing it I drove around the entire plaza, checking to see where the signs were. There is only one sign letting anybody know that dogs are not allowed that is even visible from the crosswalk as you're entering the plaza. Even then it is unclear whether the sign means that there are no dogs allowed past that sign, as most people would naturally assume, or whether it covers the sidewalk in front of that sign as well. It is precisely this kind of low level incompetence and lack of information that drives me crazy. They are actually inviting you to come to the town square, encouraging tourism and civic participation in every way that they can, then punishing you with a fine even when you seem to be abiding by the law.

The article uselessly states that is written somewhere in a city ordinance. I hadn't realized that we should read all of those before moving here.

I want to fight it, but how much energy can somebody dedicate to such a thing. Even the law will beat you down like the phone company. There comes a point where it's juts not worth it to fight it. The organized will usually beat the free; they are prepared to win, so they do.

Weren't we all supposed to have two full-time lawyers working for us as part of the promise of the industrial revolution.

How did that great pledge possibly go wrong...