Buckets of Bells, Wagons of Whistles 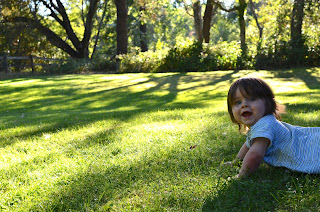 I awoke and started listening to Bob Dylan this morning. I can never quite seem to get enough. He just gets better and better. I'm listening to his brand new album now, Tempest. So far, so good.

Last night I played "Buckets of Rain" on the piano for Rachel (That link is for Beth Orton's cover of the song). It's one of Rachel's favorites. It was nice and sweet and touching and much needed for us. We sang together before going to bed, each of us in our own key. The piano also in its own respective key. It almost resembled a harmony.

We have new neighbors, with good intentions. Last night, as we were trying to put Rhys to sleep each of our phones went off consecutively and then beeped a few times after a minute or two, letting each of us know that a message had been left. Then there was a knock at the door. Apparently it was a code-red emergency of some sort. She wanted to let us know that the lawn maintenance crew would be here early today.

"Did you just call both of our phones?"

"And now you're knocking on our door while we're trying to put the baby to sleep? What could possibly be this important? Did us not answering our phones indicate anything at all to you?"

I closed the door in her face and locked it.

I feel bad about it, but what the fuck.

Let me relentlessly harass the neighbors to let them know that there might be something other than me that bothering them in the morning...

I mean, her heart's in the right place... but when two people who live next door, who have a baby, don't answer their phones, and you leave messages on each phone, does that somehow send the message that what we really need is for you to come over and knock on our door?

Why don't we just install a buzzer system from house to house so that you can alert us of anything that occurs to you, any hour of the day or night. Maybe an air horn of some sort, tie it into the Emergency Broadcast System, just in case.

I'm actually glad that I closed the door on her face when I did. One more second and I would have been screaming. Then, I might have even felt worse than I do this morning.

We all awoke at about 4am this morning. I was going to go over and ring their bell to let them know that the sun was gonna come up in a couple hours, didn't want it to wake them unexpectedly. Just stand there on their front porch banging on the door and ringing the bell, calling their phone.

Holy Christ, are they ever gonna thank me for this neighborly warning...

The funny thing is that the lawn guys showed up at their normal hour this morning. 8 am, about 4 hours after we woke up.

I think I'm going to put a sign on the front door: "If you haven't been invited to knock on this door then don't."

Or, just: "Hell is other people." -Sartre