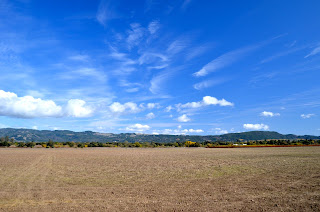 Yesterday, on my return drive from Napa, I came to a stop at an intersection on my way back into Sonoma. Floating there above were thousands of yellow leaves, hundreds of feet up into the air. No explanation for it. It looked as if an invisible funnel cloud had touched down and just lifted all of these leaves into the sky from an unsuspecting tree. I imagined a bald maple or oak somewhere very near, swaying in the wind, shaking its naked limbs in defiance at the sky.

The leaves seemed to be moving in an almost column-like direction rather than just randomly, not as if the heat from a fire had forced them upwards. There wasn't a cloud anywhere, no sign of a fire, no embers... just these many yellow leaves floating above, contrasted against the blue.

It was a strange sign that a new season is on its way.

It had a very Spielberg-like quality to it.  It gave me the feeling that something was just on the verge of happening, nobodys' parents know... I almost expected to see a group of kids following it on their bikes.

Well, I have an interview on Friday, a company in SF. Interviews are nerve-wracking for me. I haven't slept well for two nights now, in anticipation. I never feel like I convey a sense of confidence. I fumbled and stumbled my way through a phone interview yesterday. I got off the phone and was almost having a panic attack. I was defeated. But the email came later in the day that they wanted to meet me on Friday, for the position that I had hoped for. I'll probably have a stroke on my drive into the city. Or, I'll shit myself when I lean forward to shake the interviewer's hand. I'll see his nose twitch in disbelief, his eyes darting from one side to the other nervously.

I'll blurt out, "It's cool. I'm wearing diapers. I kind of knew this would happen." Then I'll sit down and give him an unnaturally frozen smile, eager to start.

It's strange, because once I'm in a position I have no real problem excelling at most anything I do. But talking about myself, trying to convince others that I am capable, is just abysmal. I feel almost as bad for the people interviewing me as I do for myself.

But as for the interviews... yikes:

"What is one of your weaknesses?"

"I like to sleep for a while after lunch. It's probably all the booze, but it tires me out a bit. I tried to balance it with some light afternoon amphetamines but that didn't work out either. I'd still feel a little bit sleepy most days, but usually just after lunch."

"Where do you see yourself in five years?"

"Do you have any questions for me?"

"How soon would it be possible for me to take my vacation days? I'd really like to ease into this thing."

I think for the next interview when they ask me if I have any questions I'm going to say Sure... I'll put on my glasses and then pull out a sort of dossier-looking folder and ask if they have any time constraints for the remainder of the day.

I got a few return emails about other jobs as well. I've never really looked for a job before, so this is all new to me: job hunting. I am eager for it to be over, excited to learn something new. I hope they make me fire somebody on my first day. Wouldn't that be a great joke for a new employee... Holy Hosanna, I hope nobody ever puts me in charge of personnel. I would permanently institute it into the corporate philosophy.

You'd really learn a lot about a person in those first few minutes.

My friend from NYC has challenged me to some sort of inter-state weight battle when I get to Florida. It scares me because he's so much bigger than I am. It's not really fair. You see, he's pissed because I fondly referred to him the other day as a "fat-ass." I think that's the phrase that I used. It might have been "lard-ass," not sure. I had thought that it was a loving term of endearment, as well as being an accurate description of his overall condition. But he took offense, I guess. Fat people are so touchy....  always touching the Twinkies.