How do you handle conflict? 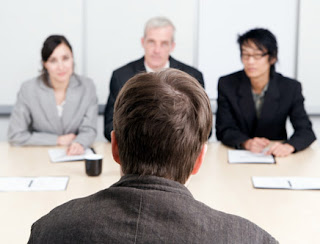 Yesterday I studied for most of the day. I went over index cards with data to be memorized, shuffled them, went over them again, and again and again. I read and re-read a "cheat sheet" that a friend provided. I tried to put all of the things that I was memorizing into paragraphs so that I would feel natural talking about them and not just reciting lines that had been memorized, my eyes drifting upwards as I tried to recall the order and significance of the facts. Now there is only the interview to wrestle with.

I suppose it is one of the most common things in the world, being nervous before an interview. Very few people ever get good at it. It is not something that most people do often enough to become entirely confident in. I suppose there are some who must. But it's like people who become good at breaking up with lovers. They are always assholes.

I've practiced a few times, sitting down with Rachel and my friend Matt, having them ask me questions. It is strange, rehearsing. Everybody wants to believe that they will be engaging, charming, articulate and gregarious... all on the spot, all under pressure.  That's not how it works though, usually. I know that from the very limited experience I have in this regard.

After writing yesterday's post I got an email. It was somebody offering to help. They explained that the job that I was applying for is precisely the type work they do for a living. I explained the need to brush up quickly on the overarching concepts, as well as some of the foundational relationships between the technologies. I went to the gym, when I got back there was an email waiting for me. Seven pages of condensed technology briefings. Victory.... Perhaps what they say is true, there are angels everywhere...

"It's about time those fuckers came out of hiding." - Bukowski