... my thoughts light fires in your cities 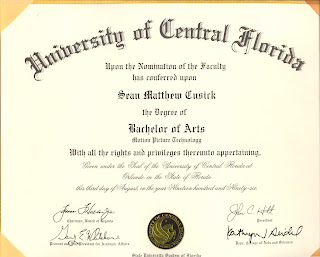 Yesterday I gave myself the mission of making all the necessary phone calls to get enrolled in an education class at Sonoma State University. Because I didn't get all of the needed paperwork submitted in time to substitute teach I assumed that what I should do is begin the year-long process towards getting my teacher certification so that I could actually be hired in a full time capacity, rather than just subbing.

My first call, to the Florida Department of Education, stopped the need for all other calls. Now, this is going to sound crazy, and probably boring, but stick with me here.... I defaulted on my student loans many years ago, close to 15. I lived underneath the radar for many years and saw no reason to burden myself with paying them back, hoping that my last living thought would be, "Fuck the student loan people..." But things didn't work out for me and I ended up getting a job. The first year at the job I filed for my taxes and got a return. I thought that I was in the clear and that they had given up. I believed that a statute of limitations must have expired somewhere. No matter, they have been defeated, vanquished, etc... I, a dragon slayer of sorts.

The next year proved the fallacy of that fantasy. They seized my tax returns. I contacted them, wanting to right the many years of wrongs and get this last and final debt off of my back. I began making payments to them. Modest payments, a couple hundred dollars, but payments nonetheless. The following year I filed my tax returns again. For a two day period the state of Florida had returned the handling of the account to their offices and seized my tax returns again; money that Rachel and I had planned to use on our French vacation/honeymoon. I was completely gutted, and very angry. But there was really nothing I could do about it. Sizable chunks of the debt were coming off. All from the interest and penalties categories, none from the principal. It was still as solid as it had been since the day that I graduated.

The debt collection agency that handles my account perpetually tried to get me involved in the "loan rehabilitation program." After talking extensively to a lawyer-friend in NYC he advised me to just keep paying the debt collection agency. The state of Florida actually advised me to do this also. It had been so long that they had ceased to claim the debt against my credit rating so all that there was to do now was to pay the debt off. It started at around $26,000. After two seized tax returns and two-and-a-half years of making payments, it is down to about $16,000.

Now, this is where it gets fucked up. I contacted the state and let them know that I wanted to start teaching and would like to get in the debt rehabilitation program, that I needed to go back to school. But I had a question about one of the provisions on the paperwork. It was worded such that it seemed that they could attach an 18.5% fee onto the entire balance, penalties and interest included, for performing this service.

What service? I asked.

"Selling your debt to another lender."

"So, you're going to charge me about $3000, with interest, just to let another lender buy this loan?"

"A new loan, with a different interest rate, probably higher."

So, I talked about other options. It was a very short conversation. Paying the loan off in full is the only other option. They will not release my transcripts to any educational institution until the loan is out of default, and they want to charge about $3000, with added interest, to let another lender take over the loan, still all guaranteed by the federal government that I will pay the debt. Not even death can save me now. They will seize any equity I might have built up in the house if I were to die with the loan unpaid.

After talking with him for a while I asked, "What were all of the penalties that I've been paying for the last two years?"

"How is it possible that you can charge me twice? And now you're charging me a percentage that includes a large portion of the other penalty, and interest."

"Well, that was then, this is now. The loan's in a different state."

"How can you justify charging me 37% (18.5 times 2) on the principal, interest and penalties on a student loan?"

"That's what you agreed to.You shouldn't sign a loan without reading it first."

"But they hadn't taught me to read yet. I had just started."

"You should have had somebody else read it for you."

"This isn't a loan, it's paper slavery. In any other business, if this were the practice, it would be considered illegal. It is fraud and racketeering on a national scale. The government guarantees a loan for a product that they know is not worth the selling price. Then, they use taxpayer money to collect on the debt, for other companies, companies that are allowed to continue adding fees on top of the debt so that the principal never disappears."

There was nothing more to talk about after that. I was one sentence away from making a bomb threat and I wasn't even going to bother hanging up and calling back. I was going to verify that he had my right address and phone number first. I was going to speak very clearly, making sure that they would have a nice audible soundbite for the news.

"This is Sean Cusick, from the graduating class of 1996. Allahu Akbar, mother fuckers. Any questions?"

"Mr and Mrs. America -- you are wrong. I am not the King of the Jews, not am I a hippie cult leader. I am what you have made of me and the mad dog devil killer fiend leper is a reflection of your society... Whatever the outcome of this madness that you call a fair trial or Christian justice, you can know this: In my mind's eye my thoughts light fires in your cities." -Charles Manson, at his trial