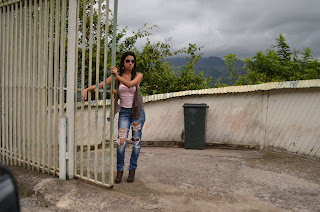 A holiday. Labor Day. I'm not sure, but I don't think that I'm supposed to observe the day when I'm unemployed. Or, maybe I'm supposed to double-down, take it to the next level, really show my support for all of those with jobs by drinking heavily and showing team-spirit for the good ol' U, S, of A, etc.

I don't know, Labor Day sounds like a socialist holiday, or worse, communist....

I tried to watch "The Iron Lady" last night. It was abysmal. First, she had no super-hero powers as I had expected, and hoped for. It was just about an old woman who had lost her mind. It was very disappointing. I had anticipated that this was just a pre-quel to Robert Downey Jr.'s Iron-Man / The Iron Lady dual-team-up against villainy for sometime in late summer 2013.

Instead it turned out to be about Margaret Thatcher.  More specifically, it seemed to be almost exclusively about the dementia she has suffered later in life. I couldn't watch it. I was ashamed for Meryl Streep to be involved in such a poorly chosen representation. I've been told that her performance alone makes the film worth watching, but I couldn't do it. After Clint's public derangement the other night it all started seeming a little bit too close to home. I've got Selavy to worry about, you know.

I never cared for Margaret Thatcher and always saw her as a Reagan with tits. But still, even with that terrible naked image of her in my mind, she was an important figure in late 20th century politics. Certainly they could have focused on more important aspects of her life. Perhaps it was just the liberals being their usual cruel selves, wanting to suggest and link together Thatcher's confusion with Reagan's slide into Alzheimer's while still holding office.

I only half joke about liberals' cruelty. I am among the guiltiest.  But I don't pretend or profess to be anything but cruel. I am an avowed sadist, occasional masochist. It's my pleasure.

No, I kid. I had gotten into a discussion with Cato about sadomasochism and he has some pretty right-wing Cristian views on the subject. So, I'm just putting a few jokes in the blog so that when he gets back from Burning Man he'll have something to to giggle about. Come to think of it, Burning Man must be over by now. Nope, it ends today. He'll probably stay out there on the playa and help clean up. He is quite the dedicated "burner" now.

I wonder what new concept of Christ on fire will emerge for him this year.

Speaking of, I never wrote of the pilgrimage of the basilica in Costa Rica. If I remember tomorrow morning maybe I will sit down and try to write it.  Tomorrow is the day that I am scheduled to take the tests that will allow me to start teaching as a substitute. Well, those tests and a few other hoops that I must jump through: background checks, personality assessments, prostate exams, etc. With Christ on my side, a carton of cigarettes, a camel or two, and the faith of a mustard seed, then I will be moving mountains through the eyes of needles in no time.