Up the valley and into the woods 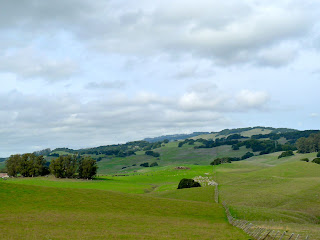 My readers are slowly returning. I have stopped posting on my other site.

Life is odd and strange and sweet when at its best.

Rachel, Rhys and I went for a hike yesterday. There is a path that cuts through a large swath of woods between two small, country highways. Midway along the hike, one that we have done many times, I decided to try an alternate path. It led in steps and easy switchbacks up a relatively steep hill for some time. We were almost at the point of turning back several times. I kept negotiating our way up the hill, promising a new and unknown vista. We arrived. Sure enough there was a crest line that was new to me. Rachel had hiked to this spot before but by a different, easier path. Far below us we could see the blue of a lake through the trees. We had been warned of rattlesnakes. A sign at the trailhead also warned of mountain lions spotted in the adjacent woods.

At the top of the small crest the brush and shrubbery had thinned out so that it was only trees, the floor of the area being covered with dried oak leaves, allowing for an easy view. We didn't linger very long there in the shade. We chose a return path that was slightly less steep but brought us back towards where the car was parked at the beginning of the path.  Rachel led. I carried the puppy, Barkley, about half the way down. The other half he cautiously navigated the trail, with me looking out for snakes, assuring him with my voice. Eventually we made it back to a familiar point on the path and turned south towards the car, all of us sweating through our clothes as we headed back. The day had nearly ended for each of us, there was still the journey home.