The most expensive selfie I've ever taken 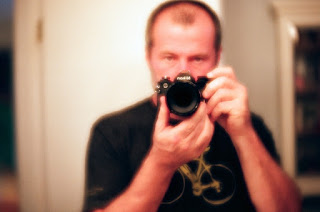 No more politics and less politically motivated social commentary, for now. I have grown tired of it, also. Though I know myself - I will be back.

Yesterday, when riding my bike, I realized that I was not getting out of it what I most wanted. I was too worried about things that are far beyond my control, conversing with others in my head, advancing imaginary opinions against imaginary responses, precluding myself from the moment that I was living in, preparing for as much future unhappiness as I was able to imagine. I've been trying to focus on things that bring me delight but have been failing pretty terribly there as well.

As readers here already know, I have been taking pictures with my new camera, a manual 35mm film camera. It turns out that I was not loading the film correctly. I shot about seven rolls and then had them all processed. Some of the rolls were older. Three of them came back completely blank. The camera and lens I bought were about $550 combined and the film, processing, and scanning was about $150.

I have spent about $700 on the image you see above.

It is a reasonably rare picture of me, so there is that. I hope that you enjoy it. It cost me an education in process and patience, and then there is the cash. I have had far more expensive life lessons, so I am trying to keep things in perspective.

I have yet to confirm that I am now doing things correctly, though I believe that I am getting closer. I opened up the back of the camera at what I thought was the midway point of another roll and discovered that it has not moved at all from when I "loaded" it. I reloaded it and now can verify that there is more resistance when I am manually advance the film with the lever. It feels less right than before, but I suspect I am getting closer. I'll probably have a roll that is all half images like the one below.

I should resort to using oversized Emojis to express myself. They are much cheaper.

The boy and his mother bought me a gift certificate to Photoworks for my birthday, which was very sweet of them, and thoughtful. That money was also tossed upon the pyre of my hobby. I could have become one year older without this added disappointment, of course. I'm going to have to apply for credit soon if I wish to keep trying things. Or, wait for another birthday's orbiting.

Here is half of the story: 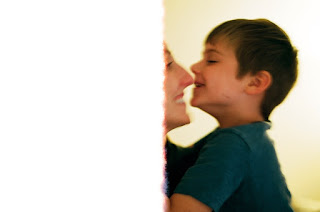