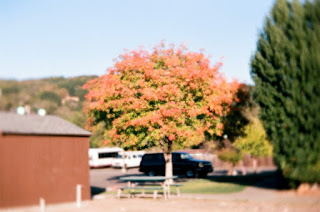 I've been writing here for seven years now, almost. I've never had so much clear insight into my own past, into myself. I hadn't realized the effect that it might have on me, to document my life's passage into time. I thought it would be fun, but clarity can be a curse. It is best to safely harbor one's own illusions. They matter. Without them, life lacks essence, little more than a series of disconnected events happening to one person. Illusions help string pain along with joy, like unstrung Christmas lights awaiting their moment.

I've been struggling lately, trying to align my idea of myself with the reality. It is best not to do this. It's difficult and offers as much danger as it does reward, maybe more. It requires ignoring the opinions of others, which seems a sensible enough policy. Everywhere I look I see that success depends somewhat on the advancement of your ideas over the ideas of others. It is not enough to simply have ideas, that alone only makes you interesting, and only if your ideas appeal to others. You must pick one of them, or a small handful, and then bludgeon the world into a kind of submission with them. When they say, Leave your mark! they don't mean in your underwear. They expect it to be a wound, or measured in the accumulation of wealth. The world is full of personal trainers who will surprise nobody and change nothing. Yet, perhaps that is what I need.

I'll see people in the gym being trained. I'm always curious to overhear the conversation. Many of them are, quite literally, paying to have somebody notice their effort, nothing more. I'm going to start giving everybody a quarter to read my posts, just to see how it feels. Or, maybe a dime.

I have grown tired and weary of America, again. I have flip-flopped my whole life between trying to find the things here that are worth defending and also being careful to not fall into the trap of seeing the entire experiment as a doomed failure, preferring the imaginary piecemeal aggregation of some better society elsewhere.

Then, someone like Trump wins the presidency. It's as if the lights have been dimmed on whatever vision I had of America and what it was meant to become. Emotional? Sure. I'm sick of being told that we shouldn't be having emotional reactions to what is happening. Feeling is another way of knowing. Feelings require imagination, yet also curses it.

At middle life I have come to accept that there are two primary visions of America and that half of the people of the nation were writhing in agony the entire time Obama was in office, honestly believing that he was destroying what was once great about living here. Many of them, much like many of my friends now, must have thrown their hands up in dispirited hopelessness the last eight years. Seeing within everything that Obama did a malevolent evil, an evil that liberals were simply too blind or unwilling to see. Or, stupid. Stupidity is the commonest argument and explanation, one that requires only the proof of disagreement. I don't need to buy into this assessment to sense that it is very real for many.

I hated George W. Bush, but I didn't demonize everything that he did. When he made choices that I agreed with I would say so, much to the chagrin of my liberal friends. They could see no good to come out of him at all. Then, I watched others react the same way to Obama.

I pointed out to my liberal friends at the time that Bush's cabinet was more diverse in ethnicity and race than any Democrat president. They would immediately launch into attacks on Rice, Powell, Gonzalez, Martinez, or Chao. I'm sure I've forgotten a few, but it brought me great pleasure to point out that a Republican was beating "us" at the cultural diversity game. The game that we were supposed to be winning. It's true, and he did. Just because Bush did something doesn't make it evil or wrong. He did a good job at sending a message to America that everyone can have a stake in what we're doing.

I had hoped that Trump was only engaging in a bit of very ugly campaign obfuscation, and was only using rhetoric to advance his candidacy with those too stupid to see through it, but appointing someone like Bannon as your Chief Strategist tells a vastly different story and one more in line with a presaging of things to come. You may not have liked Bush's appointments, and you may have even denigrated them as being "tokens", but the racism's on you for having said so, dear liberals.

What I wouldn't give for a George W. Bush right now, and I'm no fan of him or his policies. I would have celebrated a Pat Buchanan presidency over a Trump. The nativists and nationalists are now free to believe that the country is in locked goose step with them.

I wasn't going to write about this next bit. I felt like it was anecdotal, as such an attempt at persuading, and maybe unfairly expanding a point of failure into a larger context where it takes on unearned meaning. But... with that qualification in mind, I had an unusual experience a few days ago, almost a week now.

I was finishing a ride up the valley after a day or two of rain. On my return I was back near Sonoma heading through Boyes Springs, a small hamlet-city that sits just outside of Sonoma and one that many consider a part of the city of Sonoma. It has a very high population of Mexican-American families, or just the first part, living side by side with families whose lineage is more European. You know, white people.

I was coasting along when I heard someone yelling from a pickup truck as it turned onto a small street that leads up into a small neighborhood. The yelling grabbed my attention. The words were clear: Get the fuck out of the street, beaners! Then, the driver of the truck from which the yelling emerged stomped on the gas and spun their tires in the remaining rain all the way up the street. It was a show of controlled rage, a genuine racist event.

I tried to gauge the reaction of the two men that had been crossing the street but didn't wish to either stare or to make them any more self-conscious than what had just happened may have, and I couldn't see the driver of the truck. In an instant, the whole thing was over, at least from my visibility. The enraged driver had apparently grown tired of Mexican Privilege. You know, crossing streets on foot and all of that.

It was upsetting, I'll admit it. One need not succumb to the perils of emotion to have a reaction to such a thing. I thought about my boy, and what it was like growing up in Florida in the 70s when some parents would think little of using the words nigger or spic around a child. By the 80s most of those same parents were using more veiled terms. My father, Irish and from South Boston, would caution me about interacting with black guys, darkies. I never heard him use the word nigger, my mother from Virginia would never allow that nor do I believe it was some secret impulse of my father's to do so, but its use as a term became unnecessary. I knew what he meant, and he knew that I knew.

He was from a different time and place. He changed, throughout the course of his life and until his death he modified the way that he would discuss things with me and perhaps the way he felt about them himself, sensitive to the fact that I didn't feel the same as him, and that the world had also changed a bit. His second wife was of direct Mexican heritage and that was part of what he loved about her. He perhaps had the large Catholic family he always wanted, and he was quite loved there, with a type of love that I never had for him. Though I did finally arrive at a place in our relationship loving him much, and missing him now.

I'd like to believe that whatever racist dispositions exist here in Sonoma have been adequately suppressed by the changing times. I may have been wrong.

I workout at an almost all Mexican gym, so I do not idealize Mexican sensibilities as being pure and free from racism. I am treated as an unwelcome aberration by some there, and as an friendly anomaly by others. I'm Irish, have a shaved head, and think nothing of wearing white shirts to the gym and listening to Hüsker Dü's masterpiece loudly on the stereo while working out. I can only guess what they guess of me. I must seem absolutely Hitleriffic.

Racism is real, I get it. I can feel it, also. It is not necessary to pretend that it doesn't exist, or to overreact to it when signs of it become evident. But this wasn't on Facebook, where everybody's a valiant hero, filled with lionhearted bravery. This was just a few hundred yards from my apartment where I live with my son. Things adjust based on proximity. That's not an admission of anything other than being a human, so please don't tell me what I should have done in this scenario, or what you would have done.

Once I started traveling I sometimes found myself in pubs in other countries, unsurprisingly. I was amazed, and still have an admiration for pub culture. That microcosms of a nation can come together and talk publicly about the issues that face them without a focused sense of fear that at any moment a fight will break out was very refreshing to me.

If you start up a conversation with a stranger in a bar in America there is a reasonable chance that an argument will eventually ensue. Perhaps that only happens to me, and at a disproportionate rate, but I also sit and watch the interactions of others. America can be a pleasant place for those that choose to get along and be reasonable. I'm not always one of those people. There's very little conversation that occurs here that doesn't feel as if it just might be to the death. America still believes in bullfighting, as long as the bull remains an enemy to the sword. It's a game show without prizes, and millions of screaming contestants prepared to prove their worth as such.