The Eye of the Spider (Gonna Fly Now) 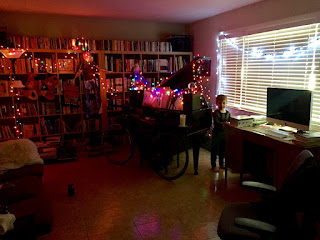 The boy and I hung up Christmas lights yesterday. They seem incomplete without a tree. Though, it's fun to string up colored lights and close the blinds, to witness the enchantment.

Perhaps I should have weighed the factors more carefully before diving in to a public commitment to do this thing. CS reminded me that I don't know how to swim. So, there is that to learn first and foremost. He has been pushing me off docks since we met. In fact, I believe that's how we met. He was bullying minorities one summer at the local fishing dock, claiming to have recently pulled in a 700 pound swordfish from that same lake using only a glow-in-the-dark yo-yo and its string as bait and tackle. He used to abuse horse tranquilizers. They can make a person a little teste, and also imaginative.

I'm certain that he's ruined my camera. He's been using the wrong cable to try to charge it. That, or the power in his 19th century plantation house utilizes no electrical standard currently still in use. I'm beginning to suspect that he never actually had that $15k worth of camera gear stolen, but he rather just tried to recharge a few batteries for the stuff and instead of conceding defeat he traded the whole bag for some equestrian questionables.

Do you remember what he claimed on his site, that my camera was manufactured out of helium? All of the key signs of equis terribilis are there. It's a shame, as he is quite intervention-resistant. It's as if he's spent his whole life practicing for that one moment. Lord knows I've tried. As soon as I turn my back then he's off and galloping on Bronco Barbiturates once again, howling at traffic lights, confusing them to be the phases of the colored moon that only he can see. He's deeply involved with that entire subculture, Donkey Downers.

I'll have to give him a good deal on the Fuji camera package, now - which includes a manual, one that also explains how to charge the batteries, and perhaps even more importantly it explains how not to destroy them. He's like having another child, maybe one that's away at boarding school, trapped between parents. The only time I hear from him is when he's broken something and needs more money. He's currently participating in a winter conversion therapy camp. He says the electricity starts to feel kind of good after a little while. Just like anything else, he claims, if you learn to just relax and take it.

Moving on, minus one camera and one plushy in remission.

What else is going on around the homestead... I endured another weekend being "on call." I'm slowly getting better at it, which means that I'm losing my preparedness edge. An emergency will of course strike when I have forgotten that they can and will. I just hope that I'm naked when it happens, and sleeping.

I'm considering doubling my coffee intake. I've been flirting with the idea for months now, but I think I'm ready to take the big plunge. I'll need to strengthen my core and cardio. I know that caffeine elevates the heart rate, so that should give me the extra capacity I'll need to run a 10k at the end of an already excruciating morning.

I've been listening to motivational music on loop all weekend.

I keep telling myself that if I can train to swim the mile then the 25 mile bike ride will seem like an hour of rest before I have to run the 10k, though I know that this is not how these things actually work. Muscular fatigue does not diminish upon exertion, but rather increases. I'll talk to CS about obtaining something designed to slow down a horse's heart, to see if I can utilize his vast and sad knowledge of such things to my advantage.

I'll re-read the by-laws and find out. I saw nothing about performance enhancers on the website. You see, it is not good enough for me to simply compete in an Olympic Triathlon, I must also cheat while doing it. Otherwise I fear that I will not derive the satisfaction that I require from the experience.

I've offered Caitlyn Jenner $40 to enroll in this Olympic thing also, because I need to prove to the world that I'm better than her. I must show everybody, once and for all, that it's probably better for you to to remain being a man if that's what you were lucky enough to have been born. If I lose to her, I will edit this page and modify that last claim, changing its gender claim. I promise.

Also, I have not beaten an older woman in a foot race in years. I'd like to add that recent accomplishment to my LinkedIn profile. I've also reached out to Billie Jean King, though her office has not returned my calls. At least Jenner's people know where the money's at.

Last night, the boy and I went to our friend's house and had a delicious dinner of beef stew and homemade chocolate mint ice cream. I was chatting with my lifelong buddy and she decided that she was going to do the Triathlon as well. I'm going to keep the horse enhancers secret from her, of course, because some people simply don't know how to be cool about such things, but already I am also plotting some legitimate ways to defeat her.

Now my requirements are two-fold: I must cheat and I must win. This is my first time in the Olympics. I want to leave my mark on history. The Guinness people have been warned about me.

Not a lot to ask, a world record on my first try, but that is where I will derive my future happiness - from the bitter and disappointed tears of my fellow competitors. I'm going to check with the organizers to see if they're okay with this race being "to the death." It's not only the best way to ensure victory it is the only way to guarantee it. Vanquishing an opponent is far too middle ages, and there is nowhere left to effectively vanquish to any longer. Simply winning the thing is only the new form of participation. They keep moving the finish line to the back of the pack.

I'd like to strike a healthy balance between the far past and the present day and conduct a more 18th century style competition, one that finishes with a duel. The first two to cross the finish line must then load muskets and trade fire under the trees until there is a clear winner.

If I can load mine in time then I just might get a clean shot at #2. 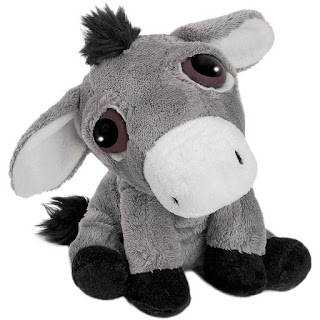