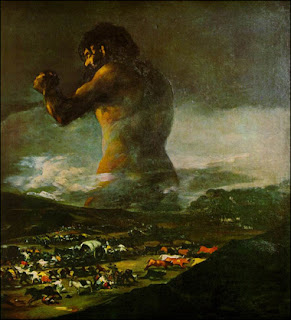 It all makes sense now, Trump has outsized his hero John Wayne, The Duke, Colossus-tomy. The highest hope that I can muster is that he will be this era's Reagan. Kids may raise their fists again at the injustice of the establishment. Hopefully a band will come along that will forever erase the remaining fragments of U2.

What else can we possibly hope.

The gym I workout at is mostly Mexican, about 9 to 1. Things just don't feel quite the same there anymore. I shaved my head a few weeks back and I haven't developed the summer tan that I had quite hoped for, one that would make me resemble a middle-aged Mel Gibson at a routine roadside check. Tonight I tried to make eye contact with everybody, I had accidentally worn a combination of blues, and white, and a touch of red. It was really something. I might not ever swim free of that coincidental wardrobe malfunction.

There's no way around it - liberals just had their fucking asses handed to them. From watching their reactions I understand so much better now why it happened. I suspected that it would, and even called it here, but had never seen the effects of societal mocking, a groundswell of reaction against cultural elitism, intellect. It shocks the senses. The shared cognitive imbalance is palpable. Watching people online, even encouraging them a bit, it's been a sadist's eden.

Yet every instinct I have is twitching that there is a very significant threat emerging. What he was willing to do to rise to power is an indication of what he will do to accrue power, and to maintain it. It is no joke. I haven't felt this nervously interested in a long time. I am wary of anybody that is self-evidently writing us into their biography.