The hideousness of time now lost 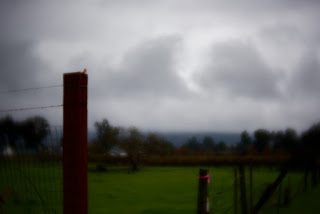 Trump's victory seems to have emboldened liberals now, also. They are correcting people on Facebook for cultural infractions at a record pace. The right complains about the liberal bias in media, but the alt-right has near complete control over the flooding basement at Facebook.

Aha, caught myself... I must find a way of escaping this. It really is like giving into the recurring impulse of addiction, or at least what I've read about such things. I have such a hard-on for political headlines right now. My eyes can't collect them quickly enough.

True liberalism should be founded first in the unhindered use of the mind. There are too many petty snitches roaming the coasts, it seems. This is not to say that ugliness does not exist, but it seems clear enough that tattle-tale-ism won't fix what ails America most.

Yesterday was again a rainy day. Too rainy to enjoy anything outside for very long, though I did drive around and try to take some pictures, only one or two of which pleased me, and those are both somber. I did fulfill my promise and grilled a ribeye steak with two over easy eggs for breakfast. So, there is that.

The ex and I took the boy roller skating, his first visit ever to a roller rink. It was a disaster. I think that he doesn't like being four years old with two adult parents that already know how to do things, things like roller skating. He shows frustrations at not being at our level of interaction. I suppose that's normal, right?

Well, I went airborne at one point and landed on my lower back, as well as hitting my head pretty hard on the rink floor. So, I'm not confident that I can still claim to know how to do things. With some more time on the disco-oval I think that I would have improved, but once I started vomiting and had to be rushed to the hospital with a concussion then our Sunday took an unexpected turn.

No, it wasn't that bad, there was no joy ride to the emergency room. But... I can see why middle-aged people like myself become more cautious of life, and whose adventures become more reasonable, less inclined to involve physical risk. The biggest peril that many people face at this age is fucking one of their friends' partners. It's actually quite good that some of my friends chose never to have children. Comparatively speaking, they're a bunch of train wrecks. It's sort of fun to watch, after the fact, but I can only sit back and wonder what next.

People are selfish, or to state it with an eye lent more to pragmatism: they advance their own wants well before the needs of others, even those to which they claim the greatest of love. I can't say that I completely blame them. I find myself withdrawing more and more from the possibility of dating, if only because it seems to be increasingly a losing prospect, or a lost game. I know that those feelings change when someone suddenly appears in front of you in life, wanting and also offering love. Everybody loves a puppy.


Though, from my perspective, this would destroy what little time that I do have for myself. You know, the very thing that allows me to be lovable. I look through my text and email history and it has occurred to me that I don't have time for anything anymore - my list of friends that I correspond with has diminished to a single handful, texts and emails have gone months without a response from me, a good friend's mother passed way here in the Bay Area and I wasn't able to attend the memorial service. If something is not an abject emergency then I can hardly schedule time for it. I'll need to get pancreatic cancer like Steve Jobs before I learn to deeply regret living this way.

Where does a woman fit in to a life like this? I have loved mostly crazy women, and you might flinch at that assessment, but I'd be happy to send you a list and chronology so that you can gauge for yourself. You'd have to go all the way back to my first real love to find a sensible, nurturing woman. Some of them might have pulled out of their decade of craziness, but that's also when things stopped working between us. Could it be me?

I'm at the point in life that - if I were a woman - I'd be getting my hair and nails done with suspicious frequency.

It's been over a year since I've been on a date, I think. If I have, then I've forgotten it. I might have gone to lunch with a woman in there somewhere. I've flirted, but without the consequence of sincerity or the mutually pleasurable escalation that would lead to a date. I practice flirting, but am trying to be cautious not to send the wrong signals, either. I live in a dangerous state of probable overreaction to everything. The slightest interest from a woman triggers every follicle in my brain, within seconds my nervous system is flooding with the cocktail drugs of primal lust and a sense of overstated charm.

I try to be sensible about these things. We know that the nervous system is built around clusters of nerve endings, many of which are designed to have us act against our own needs, particularly when the wants raise and wave their flags of orchestrated interest. Within seconds, I am willing to forgo almost everything in my own life to attend to the vague interest of another. Yet still, no serious takers. It's dispiriting. The qualities that I possess seem more suited to attracting younger women, though lose their effectiveness rather markedly when contained in the body of a middle-aged man. Perhaps that is also just another misconception of age, one embedded into our genetic structure.


The last time a woman expressed interest in me it was through LinkedIn.

Things didn't quite work out.