It's not my fear 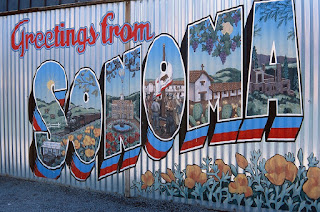 It was transition time for the boy last night - time to make the shift from mom's house to dad's. That's right, the word can mean something other than changing secondary sexual characteristics, or assuming the presidency with a hodgepodge team of twice-failed goons. The cabinet of deplorables.

So, we all went to our mutual friends' house. We chatted and had dinner and let the kid's play while they were watching The Jungle Book. My buddy and I drove to get food, first to a Chinese restaurant that was closed, then to a Thai place that was thankfully open. On the drive there and back he and I talked about Trump's victory and what it means.

My buddy is of Mexican-American heritage, as is his wife, of course it follows that so are his two children. He spoke of a growing sense of fear for them, his thankfulness that they are both light skinned, hoping that might help shield them from some of the things that we're starting to see emerge in our sweet little hamlet of Sonoma. He and his wife both work in education. The stories are beginning to pour in about racially motivated incidents at school. It's becoming clearer that the dangerous rhetoric seems to have found its new voice, has bubbled up again from the muddy mumbles of a few to the renewed utterances of misguided nationalism and misplaced nativism.

The symbols are re-appearing, the bristling assertions of whiteness and their renewed claims of cultural victimhood. The racists are tired of being told that they are racist. So, they're doing the only sensible thing they can, they're putting their whiteness back on the map, some with boots.

It's difficult not to feel rage, though that feeling is meaningless or worse, useless. This has brought back to the forefront at least one part of my youth - anger at injustice, ignorance, intolerance. I haven't been this disappointed in America in a long while. I didn't like Hillary, but she has never been charged with a crime, as far as I know. Think about the tremendous lie that was hoisted on America in that. Not that she should have been charged, as some people may read that last sentence quite differently than what I intended. We accepted a New York real estate developer with ties to both the mob and foreign investors, as well as foreign rulers, as the head of our executive branch of government. That was the nation's answer to the Hillary problem.

I suppose it's a good thing to periodically be reminded that racism doesn't just disappear when ignored. That is, at least if you enjoy the luxury of white privilege, which I must.

When I was in the car with my buddy I realized that my fear in all of this is that my son will be exposed to racism. My buddy's fear, as is his wife's, is that their children may become the victims of it. You can say all you want about exposure to racism making you also a victim of it, but it's just not the same. He spoke of a time in the future where he might need to go places without his children, for fear of what they might be unknowingly subjected to.  I can't pretend not to acknowledge a Thanksgiving ladleful of white privilege when hearing that. I can't pretend to have felt that way before, at least until he said it in the car. Then, I could feel it only for him and his family. It's not my fear. It's not a feeling that I have to either contend with or endure. Most of America gets to walk away from this, and about half of them seem to have chosen to do so.

Then, of course, there are my gay friends, black friends, and on and on and on. I'm sure I must know some Muslims. Do I? I know far more Hindus than I do Muslims. I generally avoid anybody that openly worships anything, particularly those that either talk about it or expect my reverence and deference to their deities. I just scribbled a little doodle of Muhammad Ali as Ganesha, to re-assert my lifelong commitment to irreverence towards all things reverent.

All of my friends of color, or non-heterosexual orientation, or of shared heritage, or those that are female are all worried, many of them in a way that they have never felt before.

My buddy's wife spoke of a mutual friend, she saw him wearing the safety pin at work and he explained to her what it was for. She hadn't heard of it yet. She was enthused at the idea. Like a fucking dumbass I shot it down as potentially patronizing, which it very well might be, though it need not be disassembled as an act of solidarity. Sometimes the intention of a thing is as important as its possible outcomes.

At least for the moment, and upon rethinking the safety pin's intention, I hate the conservatives on the right and the fundamentalist on the left who are disparaging it much more than anybody I know that might wish to wear the pin as an expression of shared sensibilities and beliefs. I mean, I get it, the criticisms of the movement are valid, but sometimes the moment calls for gestures and symbols of resistance. It brought some solace to my friend. There is that, I suppose, and that is always welcome and needed. There must be more, though. One must be on guard a bit against everything. It tires the mind, and a tired mind is dangerous. Too willing to ignore and too able to dismiss.

Those that seem least surprised by any of this are my black friends. They don't like it, but they've seen all of it before many times and were not nearly as surprised as were the choir of white liberals. Also, Trump didn't vilify the black community. I believe that they see him for what he is, and he need not say anything for them to know exactly what he's all about. If somebody would just whisper in Trump's ear that immigrants might make for good slaves then the talk of a wall might be ended for good. Or, at least the wall would lose its present form as a symbol.

I found out something that I did not know about my ex-wife last night: she thinks Dane Cook is good looking. This perhaps gives some insight into why things failed. I lack frat-boy credentials. I knew that I fucked up somewhere along the way, it's just so hard to pinpoint these things.

She helped counter-balance this newly discovered and unexpected disposition a bit by giving a monologue about the successes and failures of public school integration. She said that The South has been far more effective in this regard than have other parts of the nation. There are liberal enclaves everywhere that have successfully resisted public educational integration. I was astonished, though it all made perfect sense, and in retrospect should not have surprised me at all. I've seen it but ignored it.

It turns out that guilting an entire region long enough for bigotry and ignorance just might have an upside. It just might work. Perhaps instead of trying to understand the needs of the working class in the red states maybe we need to return to the systematic shaming of them as being filled with deep pockets of ignorant bigotry. Just look at what good it's done for the South.