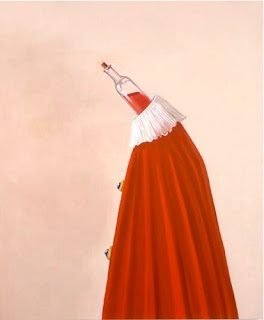 Who wants to hear more about my recent experiences biking, or why Trump supporters are so eager to usher in apocalypse? I've been giving the first a lot of thought but have not been able to take notes. I might start live streaming my cycling monologues once I install a mic on my helmet. Just a river of out-of-breath invectives and desperate promises I'll never keep.

Well, I can understand how it might not be of interest to anybody, even cyclists, but this site is about me writing emails that have nowhere to go. So, fuck off and block me... send me to the spam can.

No, no... none of that of course. I'm still just trying to find Jesus. I live in nearly constant fear that CS might find him first. I don't really want Jesus in my life, but I do think that finding him would help my singing career, or maybe if I could convince him to sell tickets then I could satisfy the dreams of all those waterheads that choose him if they could speak to anybody in history.

Wouldn't that be great, to excavate this wandering sectarian and have him unleash a bunch of local tribal nonsense on the modern world, an inarticulate FrankenChrist. Oh fuck, it would be truly great to hear the real Jesus speak, just once. To watch the faces of so many believers drop in confusion and disappointment as they try to align what they believe their religion to be with the actual wandering shepherd they purport to be so imminently worthy of worship and veneration has to say to the modern world. It would be straight out of a Monthy Python script for the believers and non-believers both. You'd have some that would simply adjust to his nearly pre-historic sensibilities and claim the new right as the true right.

You heard him? Let's round up our enemies and put them to the fire after we poke their eyes out.

Or, maybe that was Paul. I forget.

I heard that the Greeks have been doing some forensics, also poking around the dust of His little hillside resting place at the Church of the Holy Sphincter. The scientists involved in finding this site - some three centuries after Christ's life and death - are said to have been the finest geological minds of their time. Some thousand years before the golden age of discovery.

Ah well. It is not enough for me simply not to believe. My happiness derives from menacing the faith of others. It is my cross to bear, as they say. I'm like the Christ of Christmas lost, a sort of modern day Rick Moranis in Ghostbusters. I also use a spaghetti strainer in many of my purely clinical probes.

Who gives a Lake Michigan fuck about the Cubs when they're over in Jerusalem poking around the holiest of all dust. I might put an Aramaic translator on retainer, just in case. You never know, as they say. If the Cubs can do it then maybe Jesus eats his brats with mustard.

Okay, when I awake straight from sleep without experiencing or remembering any of my dreams then this is the occasional result. The mind has a tendency to make senseless things sensible for the purpose of fascination, comedy, and anxiety. They function together as my Holy Truancy: The Fasci, the Fun, and the Holy Stress.

My religion requires that I mock all things, act vengefully towards all others, to trade slaves as the market permits, to only sell brides when it is in the groom's best interest, to conduct my ethnic cleansing in the name of something holy, and to never covet my neighbor's ass. I dispense (of) justice, you should also.

Perhaps one day they will also dust my sphincter for prints, looking carefully for the type promises and secrets that a holy sphincter just can't keep.