Moments to which the eye can not return 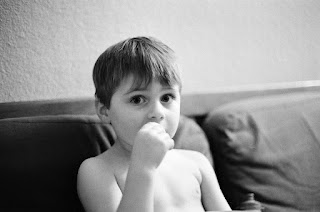 The second chapter of the holidays has passed. There still remains the surviving of Christmas, then enduring inanities celebrating the of end of calendar year with imbeciles. Afterwards, I'll be free to enjoy my misery in seclusion for the remainder of January, February, and whatever comes after that. Or, until Spring, whichever announces itself first in the morning's dawn.

No, it is not all that bad. Thanksgiving went well. The boy seemed happy enough. Thanksgiving doesn't do very much for kids. They get fed. You can try to dress it up, but they know it's a cheat. They are all born as ungrateful shoplifters, then spend a lifetime trying to find ways to be otherwise. Some succeed.

I found another roll of film that looked as if it has been "shot," though I suspect that I had accomplished with it precisely what I had with the others. All that I did was put the film in the camera for a bit, pretend to take pictures with it, having happily operated all of the manual controls, then rolled the leader back into the roll so as to render the roll unusable without having captured a single image.

It'll cost me about $20 more to find out if my failure is complete. I spent about $120 to create two images that I like. This helps me appreciate the approximately $15k that I have wrapped up in my digital kits.

It's sometimes good to lose time and money learning things. It might prevent me from doing it again. Though, losing images that I had hoped to have represents a little breaking along the surface of the heart.

Floating down, through the clouds, memories come rushing up to meet me now