Self-Help (and where to get some) 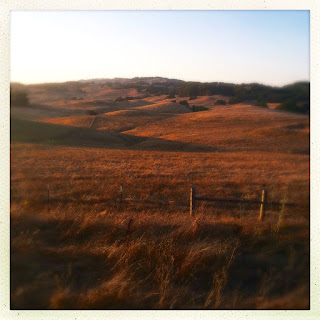 The first real ride on the new bike, yesterday. I decided on an over-the-river-and-through-the-woods route. It was only an over-the-hill ride, but you get the idea. My fight is with age and against aging. It is all there is that is left, each stroke a temporary victory against some clock in the sky.

Across the low mountainous ripples that allow easy passage from Sonoma to Petaluma there arrives a point in the ride where the valley opens up wide towards the coast, providing one of the most ecstatic vistas in the region, as if it is not the land but rather something inside of the viewer that has instead opened. A glimpse into the eyes of life. The sun drops slowly from its apex in the sky, the mechanics of the orbitals become clearer. The ending of a day says something that the beginning can not.

I rode over and past the spot where I would often stop and turn around on my mountain bike, though I am adjusting to the differences and their unique charms.

I do something perhaps quite usual within myself when exercising - I expect more. The voice that I use to coerce my fatigued body into compliance is an odd one. On some level I suppose that this voice loves me, even though it sometimes struggles saying just that. The inner voice does make me laugh, there is that. I mean, Jesus, what happens to a man? I fluctuate back and forth between having tender observations about life and living to a screaming internal incantation of: pump your fat fucking ass up that hill you chronic masturbator.

Well, sort of. I wouldn't call it chronic, more enthusiastic than debilitating and progressive.

It is a form of motivational speech that might not pass muster with Anthony Robbins. What is it with cyclists? So many seem to embrace some inner self-help component of riding. I mean, it's somewhat inherent in all exercise, but cyclists seem more annoying about their self-regimens, and the claimed beneficial results. Of course it's therapeutic, why must it be ruined with talk?

There is a tremendous beauty to the simplicity of riding. There is that. It seems implausible that a machine so simple, one that arrived so late in man's history, can produce such ease of speed. The sensation of "getting away" is deeply liberating, tied in with my notions of childhood and what I once needed. I remember getting on my bike when I was a young boy and riding away from my parent's house, never to return until dinner. I dreamed of escape for as long as I can remember, though I did sometimes contemplate what sadness it might bring my mother. You see, I was heroic in my loneliness. After her death, I drifted towards another life and different families, ones of my own choosing. I learned to better love and accept and forgive there in a way that seemed impossible with my own family until I had tried.

See what I mean?

Cycling delivers the capacity to bring out these once deeply settled issues and shows them as being far more unsettled than I had at a time convinced myself. There is nothing but that voice spent inside oneself, listening to the back and forth narrative of one's own weaknesses and strengths, one's triumphs and otherwise. It's like a 12,000 step program every day. It's not for everybody, this forced quietude. It can be a terror to listen to yourself, if you are anything like me.

The problem with so many people is that they have ceased to think about the things they claim to think about. Check Facebook, you'll see. So much is still unsettled. Every now and then, when riding, an observation appears in the mind that demands renewed attention. For whatever reason, the mind seems less guarded, more open to reexamining some of the old court cases, as if there is new evidence to present that may exonerate the condemned.

I am trying to find new ways to love people. Best not to rest too heavily on the past there. Again, my fight is with age and against aging.

After hitting my unstated goal - the outskirts of Petaluma where the farms begin to disappear, the warehouses rise around the roads at first in single stories - I turned and began the ride home with the sun to my back, the softening colors transitioning across the valley around me, almost imperceptibly. The softness of the day's ending also closing its hands upon me.

On the road ahead was my shadow, looking more fit than what seemed possible. The dark outline not revealing anything more than what I would want it to. My body proportioned in such a way as to be flattering, even to me. The dancing apparition appearing younger and stronger when stretched out away from the eyes that are so accustomed to it. Cycling on the just road ahead of me, also heading home. Just barely in the lead, our tires nearly touching.