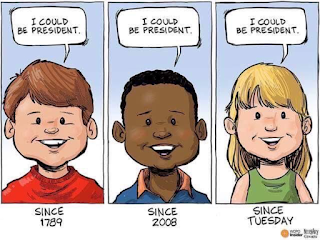 I'm just going to focus on the only thing positive that I might be able to find in today: If at the end of it all America has their first female president, well that's great. Truly great. It's about fucking time. I'm happy to see it in my lifetime. That's it. I've become a single issue voter. I want little girls to grow up in a world where they believe that they can do all of the things that little boys can do. I do.

Hillary self-defines as a woman. I think that one of those people should be in the White House. That's it. I think that she should be allowed to shit in the men's room also, if she wants. Truly. It's what everybody's fighting for. Let a woman shit where the men have been shitting, I say.

It might actually improve the place, thinks Louis C.K. He wants a President Mommy, and argues that Hillary is just that. The argument fails for that reason, though he does make other points that I would agree with.

I don't think that she'll be a great president, though I am always hopeful. I was even hopeful with Bush, the second one. The first Bush I had no hope for. He was Reagan's Hillary.

After writing last night's post, lying in bed, wanting to go to sleep, it occurred to me that my mother would have few memories of Hillary Clinton. She died October 1992, I think, or '93. She would have none of the Clinton fungus growing on her that the rest of us do.

I believe in women, despite their individual attempts to dissuade me.

Hillary is just as qualified to advance the executive expansion of power as any man, probably more so. I suspect that is what many men fear.

We know that if you concede anything to a woman then that concession is almost always doubled. Whatever it is - guilt, love, a promise, money, power, anything... They all double in value or magnitude between the ears and mind of a woman. Whatever you said just cost you twice what you thought it would. This may be because so many women live in half truths and through metaphor. They insist upon it, or they don't want to play. It is an enormous part of their charm and mystery, but it also becomes the curse of how they see the world, and perhaps why they don't age as well as men.

Men have a similar affliction. They often over-speak, exaggerate, knowing that the truth of the thing is about at the midway point between what they said and what actually happened. When they mature they simply exaggerate less

If you think a woman doesn't try to bridge the gap between youthful doubling of the values of the world and their own aging then take note of a middle aged woman's makeup habits. It is the physical manifestation of the perpetuation of an idea of self. Men do it also, in different ways, but the evidence is not left smeared in color across their faces.

Sexist, you say? Of course it is, I have blanketed almost all of us, as if. But you can't show me that it doesn't happen.

Combining these differences in disposition and simple conversation and you are already four-fold in distance from the truth. That is, if you believe in the objective, impartial nature of such things. If you don't, then try a few romantic breakups.

Love will smash your silly notions.