Were those the days? 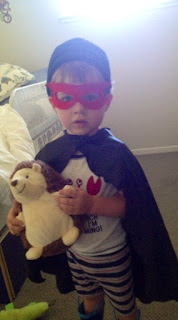 I started trying to write a post about forty minutes ago. Instead of sitting at the kitchen table I thought that I would sit at my desk and use my iMac. I've been trying to stay away from work when I'm not working, etc. So, now, forty-five minutes later I finally have my iMac working in a way that I might use it. I used to be an Apple technician and I rarely use this machine any more except to occasionally update its software, which I'm convinced is the problem. In fact, I am certain that it is. Activity Monitor shows how much this processor struggles with the increasing demand of System tasks.

Apple has done a great job at turning its computers into iPhones. At least with the iPhone they have instituted their aggressive obsolescence into the pricing structure.

My brother sent me a birthday card - one that his kids mildly objected to - that showed Jesus famously offering the multitudes bread and fish. The crowd is responding back with questions about the gluten in the bread and whether the mercury in the fish had been tested. There might have even been a vegan in the group. The inside says, "Avoid complainers."

So far, I've done pretty well. I out-do them, tire them out. They seem to find other people in which to talk towards. It's usually because I grow bored and will start criticizing their criticisms.

Jesus was among the most famous complainers of the last two thousand years, which I found to add an extra layer of humor to the thing. Did you hear about what he did to the money-changers in the temple? The Romans let him go to his death for that heresy. My brother bought me a book about Jesus last Christmas, I think. It's even one that I had heard of: The Sermon on the Mount by Emmet Fox.

What he really meant was to avoid vegans, I think.

It has sat with a stack of other books that I've been meaning to read the first fifty pages of. Not that I wouldn't read more, but I'll usually give a book fifty pages worth of reading before I give up. If it's kept my interest for that long then I'll read another fifty, and so on until I have either read or tried to read every book I own, or have given away the ones that I have confidence that I will not return. There are a bunch that I've been meaning to go back to but haven't had the time - Infinite Jest, The Idiot, In Search of Lost Time, Death on the Installment Plan. There must be others. I've never read Anna Karenina.

I have an unnecessarily complicated relationship with my past, for reasons I've never understood. It has bubbled up in some unexpected ways most of my life, but more so recently. I've been considering it vaguely now for weeks. I wanted to escape my life and youth, starting from around the age of fourteen. I never quite grew out of that phase. I romanticized departure yet never became very good at it. When not being careful, I can become mildly resentful of those of my past who continue to linger around. Not everyone of course, many I'm fond of, but the ones that seem to embrace and embody only the ideals or memories of a certain time.

There were people from my youth, all they seem willing to talk about is the 70s and 80s, or what we did then. Then there were people I knew through the world of nightclubbing. They do not seem able to discuss anything else. They remember every detail of every stupid incident that I've ever caused, even the ones that aren't true.

That's it. Those are the only two eras of my life. I guess there's the last ten years working for tech companies that could constitute a third. Jesus, how did my life end up half over and I've only done two things with it. I'm not complaining here, Jesus, I promise. I'm not complaining, Jesus, it's just a question.

Many consider it pure luck that I'm even able to do the tech thing, though many more must have felt that way about dj'ing. I was perhaps happiest when people seemed envious of my life, yet didn't recognize it at the time. Or, didn't recognize it enough. I have no idea what doing so might have accomplished. It seems implausible that I could have been more smug. One can always be more arrogant. We know that now. Fewer complaints maybe. Nobody, I do not think, looks back wistfully on their many years of griping.

Who knows, maybe I'll sit around the fire one dark winter night and tell proud stories about how much better it used to be to grumble, and what a great time it was for the grumblers.