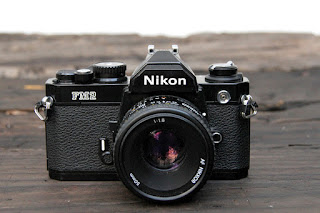 When left to my own devices, I will spend. I just bought the above camera. It was under $300, but I'll be forced to shoot with it in ways that I don't with my others: manually. This is not to say that I can't shoot without extra considerations when using with my other cameras, I just don't.

I need to spend money to make sure that I'm shooting authentically.  If you try things you make mistakes, and that's what I want more of lately, it seems.

Given the opportunity I would probably revert to a world that was pre-computer, though it would be an initial shock. I want to be a kid again but not with kid toys. I want endless days of leisure and fun, but with all the stuff that I have now. Okay, maybe not pre-computer, then. If I didn't work for a living being on a computer all day long I might want to go back to producing music. It was fun, until the party stopped.... (second link is the last track I ever did)

The first linked track above was recorded the morning of Sept. 11th, 2001... to give you an idea of what I was doing on the day that they finally stopped shooting JFK. I was in Manchester. It was early afternoon when we got the news, around 2:30. I couldn't leave England - was living in NYC at the time. My girlfriend was at home in the East Village, under the oddly inviting military control of all of lower Manhattan.

I was overseas with the woman that would become my wife, then mother of my son, then the other term: ex-. We named the boy "Rhys" in part because we drove down towards Wales together, to Cheshire. Rhys is a Welsh name, we both liked the odd poetic syntax of y being the only vowel. She and I had started to concede feelings for one another, then. Two expatriates stranded together in a desert bedroom, just she and I, tasked with repopulating the earth. After that, all that it took was for the girlfriend back in NYC to break my heart, nudging a seemingly unstoppable story into nearly unexpected motion.