A Boy and his Bow 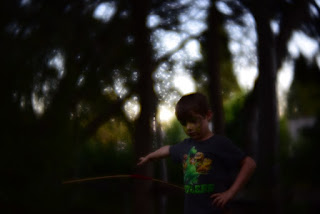 I love the borrowed lens. I must own one, soon. There are images that arrive straight out of the camera (above) that I find fascinating. There's some little inherent drama to much of what appears on the other side of the lens. It has some built-in myth.

The above was from the boy and I playing bow and arrow in the backyard. I captured a magical little moment in which the bow appears to be floating in relation to the boys hand - summoned by it, levitating under his power.

I took hundreds of pictures yesterday. The curved bokeh effect is fantastic. What's another $500? There is an unsettling darkness to many of the images that I took yesterday. One friend referred to the image below as "shroomy," which it is, but it is other things also. 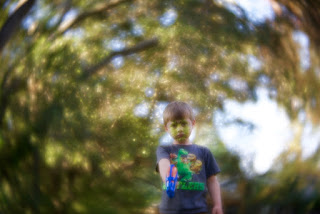 It's not as if the image has to be unnerving. It just happens. It's the single-shooter standing his ground look.

The below image was taken within a few minutes of the above ones. It just lacks the occultish charm of the others. 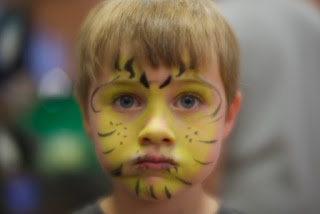 The dream-like-state of the soft focus will go far. It creates a sense of the fantastical that speaks to me. I'll never shoot a sharp image again. I swear it for all of now.

I have been shooting in Manual mode, to prepare for the arrival of my Nikon FM2n film camera this week, so the exposure is not always correct, or even close, but sometimes the lucky accidents are better than the other, and sometimes luck is all that there is. 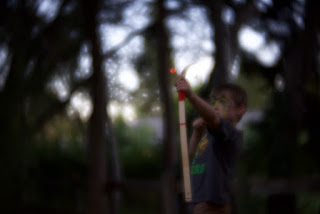