The Express Lane - Being American 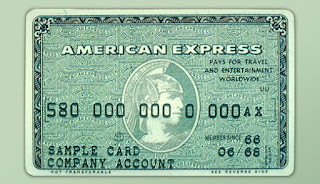 I have lost my healthy fear of credit cards. I'm not sure when it happened, but it has, and now my newfound fiscal courage is complete. There is a pretty good chance that I'll buy a two-thousand dollar bike today, the one that I posted about yesterday. All of it will be on credit.

I lived for almost 30 years without using credit at all. I won't bother going into details, but, there was a "marriage misunderstandment" in which I ended up with an American Express card, one that I slowly started becoming more and more comfortable using. I kept it in my wallet. From that moment forward have unfolded most of my other joys in life. I am spending more than I'm making. In and of itself this is not that much of a problem, if it can be recognized and corrected for before the damage is total, and at least as long as I have enough money in savings to cover whatever purchases I make.

I know that's not how personal finances are supposed to work, but that is what I am doing. I am engaging in some personal economic theory. My stroke of genius seems to be related to the fact that I have shifted to cards that do not require full payment at the end of each month.

I half kid. I do recognize that there is something irrational about my habits. I want to reward myself for some unnamed thing that I have lately achieved. Or, I am using the purchase of objects to stave off intense feelings of isolation and dissatisfaction.

Who know, who cares. That is what I say.

The point is that I have approximated happiness. My life used to be very rich with experience, now I am accumulating the things that I want.

I tried to break up this pattern by booking a flight to Denver, but it does not seem that it was meant to be. I understand that "things" do not generally make a person happy, but that experiences can. That's part of why I try to buy things that will improve my experience - camera(s) and bike(s). This system works, as long as I am still having actual experiences, preferably ones that involve some traveling. If I find myself sitting around naked with my cameras then it's not always as satisfying as you, dear readers, might envision.

To give you an idea of how eager I am to waste money: I just booked a flight to Denver and then cancelled it fifteen minutes later. $99.

I have seen them on the internet where they all like me, and encourage staring. Don't some women just do the silliest things when I click on their little thumbnail. It can have the most pronounced effect on the viewer.