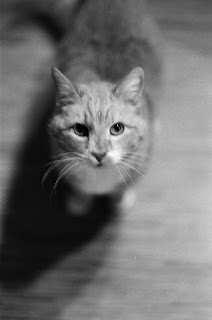 I recall watching the reports on the news and wanting to live somewhere exciting - even then, under those circumstances. The streets had buckled northwards into San Francisco. People were frantic. I remember seeing some on television climbing out from underneath the collapsed sections of double level roads, then being envious of the stories they would one day have to tell.

I had no idea at that time that I would live in New York one day. I had never been to New York, could only dream at what it might be like. It turned out to be almost exactly as it is portrayed. More than any other place that I've been, the New York experience is very well documented, almost to a fault. I imagine there are others that must feel that way about Paris and London, or even some poor fools that must also feel that way about Bucharest.

CS will return and have stories to tell, even if he doesn't bother telling them. It is what people do with NY. Some cultures separate people by class and wealth divisions, like they do in Texas. America is separated by those who know how to get around New York and those who are lost and wander the other states in search of a good bagel and slice of pizza, eventually settling down and telling themselves and their children that it doesn't really matter, but somehow voting does.

They hammer this point home to their kids who will then vote against everything their parents stood for. It will be treated as a matter of family treason.

I am cat-watching for a friend. They have an old cat that adores me. It provides for me the feeling that animals love me, without the responsibility of having to prove any of them wrong. In truth, I do love the old cat. He has been forgotten by the time that brought him into being. Once, long ago, he was a great prowler of neighborhoods, as proud as he was beautiful and able. Now, he summons much of his strength only to nudge my elbow into petting compliance.

My favorite pussy. He's orange with a soft triangular white stripe going down his chest. He looks like one of those orange cream pops, but covered in fur. He is best at reminding me that he is still there. When he detects that my arm is moving towards him for the purpose of petting he contorts his feline body into shapes that make the task sometimes difficult to accomplish. You'd think that I was the only one that talked to him, the way he purrs and meows and vibrates at my presence. He and I are good buddies, and the offer has been made for him to become mine, but he is old and I do not wish to be any animal's Charon.

Well, I wrote that this morning while cat-sitting. I'll return this afternoon when I commute back from the city. This same old kitty will be waiting for the gentle rub of my hand and for my soft, comforting words.  He will rub his head and cheek on my shirt, extending it to intercept my hand as often and as well as he can, leaning ever further over from the kitchen barstool where he sits happily and purrs next to me.

This morning, he covered my blue shirt in orange cat hair. A thing that I had not yet noticed until this moment.