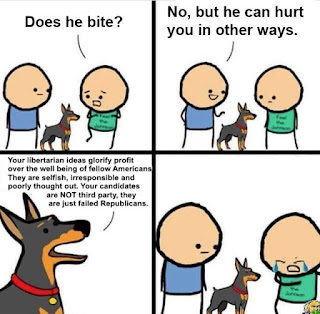 I am tired of the world. Or rather, tired of the world I live in. Few things in my life have been as dispiriting as this presidential campaign. I just want it to be over with. My fellow Americans, our long national nightmare is finally beginning. There will be no winning for the overwhelming majority of Americans. When both candidates are polling as being the two least liked candidates in history then something is very broken.

Trump advocates sexual assault, now. As if that will matter to anybody that was on the fence. When America sends its voters, they're not sending their best. They're sending the rapists. Some of them, I'm sure, are good people.

The other day I began an argument with this knob-end from Texas. He likes to make sweeping categorical statements about what liberals think and believe, and the many faults found therein, particularly the hypocrisy of liberalism. Within seconds he was offering to compare tax returns with me. I guess that is the expected behavior from an adult in Texas. Who knows. I offered to pleasure his wife for him, a sentiment that I felt was commensurately childish and crude with the tax return offer. Nobody seemed to understand that, or that any of the other jokes I was making, were in response to an idiotic challenge. I must seem like Andy Kaufman to conservatives, nonsensical and also unsettling. I am certain that ol' Anthony T. Weiner from Texas was one click away from offering me a dick pic and demanding to see mine.

Honestly, what the fuck... Somehow, I still ended up being the bad guy in this exchange, of course, and to no one's genuine surprise. It had something to do with family honor. Seriously offering to compare taxes is acceptable, jokingly offering to pleasure a woman is somehow over the line. I know that I am a lopsided believer in many things, but you tell me, does that sound right? I hadn't quite realized that my opponent was related to my friend, and his wife was my buddy's sister, but, oh well, and oops... all is fair in love and taxes.

Because nothing quite supports an opinion as does the amount of personal federal taxes paid. We are certainly doing everything we can to move towards a truly progressive society, one in which only the wealthiest can possibly benefit from "democracy" through voting.

Social media politics and cheap polemics has beaten the life out of me. I used to find it mildly engaging. Not any more. I have learned my lesson. I'll stay away from it, quit cold turkey, as they say.  It won't be easy. I had thought that socio-political addiction of this kind was funny, until I found myself married, with kids, a sore asshole... angrily offering to show some online stranger my 1040 Long Form.