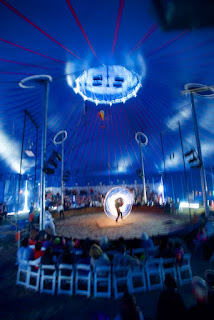 We took the boy to the Hardly Strictly Bluegrass festival on Saturday, where he rolled in the grass and dirt to the mostly country music that was being played. I didn't bring a camera, other than my phone, which I didn't use as a camera. We sat under the trees and chatted away the day.

As we were walking in I heard three songs by the Mekons. They sound better than they did in the 80s, at least from the live shows that I've heard.

I feel as if I have slid into the home plate of Monday, the crowd is cheering and the umpire swings his arms wide to announce that I am SAFE! but then I just walk back to the dugout. I'm done. It's all over, this weekend of darting from base to base.

On Sunday, we took the boy to a traveling Italian circus in Napa. He ate popcorn and cotton candy and watched the clowns perform their comedic mischief, and he saw the acrobats glide and fly from swing to swing. He seemed genuinely pleased with the thing and had a pretty good time watching in amazement.

One weekend only, under the big top, and all of that. I also sat pleased and amazed to be seeing the boy enjoy the carnival. It's lack of pretense made it all work and the magic seemed to take flight.

The event did have the effect of pulling us back in time and place, granting the illusion of life's silly simplicity. Wooden chairs and rickety plywood bleachers nearly completed the illusion. If that didn't, the selling of only lemonade as a refreshment did.

There were the classic intermissions, with the clowns vying for laughter and participation, aping the playing of trombones, playing catch with their hats with people in the audience. 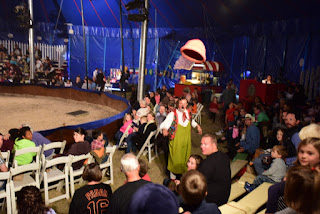 One clown in particular, Nino, developed a fascination with our visiting friend. He must have detected the hint of Canadian on her, a touch of Cirque du Soleil in the air. He began the clown dance of flirtation, tossing his hat repeatedly back and forth with her, only her.

This of course contained comedic value for the many witnesses. Oh, those Italians...

Afterwards, he found her among the crowd. We all took pictures and laughed. In the clown fashion, he held out his cheek for a kiss: 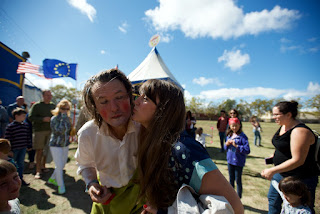 And at the last possible moment... 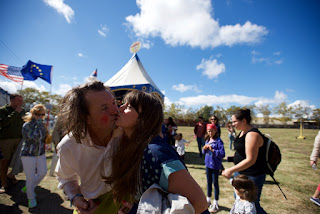 She was given one.