The problem with non-optional abstinence 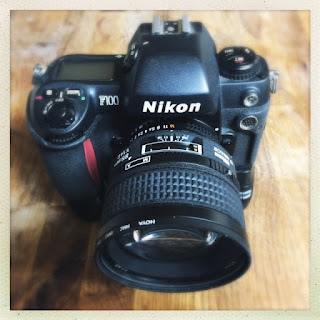 Since I can't seem to find a way to throw out all of my money with digital cameras I've started shooting film again. Doesn't matter, I'm shooting color film when there is no reason at all to do so. Digital cameras handle colors better than film, for the most part. Everybody knows it, but that won't stop me. I'll shoot a few rolls of color today, and then a few rolls of Ilford HP5 black-and-white. It would take far less energy for me to just drop $40 cash in the garbage.

I'm getting my Nikon FM2n today, so I guess I wanted to shoot through as much film on my F100 before the new camera gets here so that I'll have to buy more. As long as I am spending money I don't tend to notice that I also don't have a girlfriend, or not as much. If I was having sex again I wouldn't look at my cameras for months.

When I do get a girlfriend, that's how I'll know that it's time to move on: I'll start taking pictures of her.

Fuck, even that thought feels like a dose of pre-emptive fatalistic creepiness.

I've emailed two ex-girlfriends in the last few days. I hadn't talked to either in a while. Both of them were the loves of my life - one for about ten years, the other for about ten weeks. One was having a birthday. The other, well, I had news of a mutual friend's passing.

Ex-girlfriends are the animated trophies of failed love. I have a whole room dedicated to them in heaven. A corner office filled with stardusty shelves, engraved plaques, medals, ribbons all draped over the plasticine icons of various sport, the figures of athletes in action. Bowlers, archers, runners in motion, and me. The tangible, durable reminders of what once was.

No, no... I have only a handful of pictures of a few ex-girlfriends dancing in their underwear, or less. Nothing more. These are far more interesting to look at than a dusty roomful of trophies in the imagined afterlife.

I wonder what it's like to have an ex-girlfriend that acts more like an ex-boyfriend. Every time I see one of my ex-g's it looks as if they just had their hair and nails done, they've been sleeping with their award winning personal trainer for about 9-12 months when we only broke up in the early days of summer. They all have new cars and sunglasses to match. Every single one of them.

Just once, I'd like to go to a restaurant and see a total ex-loser - collared shirt untucked and wrinkled at the bottom, couple stains still dripping along the front, the shirt's next stains still at the bottom of the pint glass in their hand, the most recent shot of whiskey sharply cutting through the beer on their breath, disheveled hair in need of a cut and brushing, unshaven legs postured in the unkempt way, she keeps heading off to the bathroom and then coming back to offer me coke, which I politely decline with the hint of a smirk.

I need somebody to hit rock bottom for me, a couple times. An act of compensatory love. To really shame themselves - to text me when I don't want to be texted, leaving voice mails on my phone during the Blair Witch hours, all of that. Why don't I get to break anybody's heart any more?

Well, in a perfect world, I would... But, I'm not going to sit around waiting to break up with somebody just so that I can enjoy their short and fast slide into near total disrepair and occasional madness. I'm going to go out and find one.

Why do women always pull themselves together so well after a breakup, or in the few months leading up to it when we were trying to work through our problems. While men always seem to take a couple of years to turn the ship around and back head towards international waters where laws just don't matter any more.

It's abject sexism, pure and simple, and the worst kind: congenital. What else could possibly explain this complex and elusive gender-specific phenomenon.