Attributes of a Scorpion 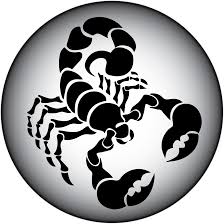 CS sends me links in the morning. I am tempted to write about them. I'll start, but then realize that there are some opinions that shouldn't ever go public. We live in polemical times. It is only accepted to be very against bad things. To question those who are against bad things is also bad. Bad things are bad, and nobody knows that like the online community does. They can tell you when something is bad just by reading the first half of a headline. A simple click of the wrist and all of the world's ills are categorized. Make your support or denunciations known.

Alternately, you can instinctively determine what the good things in life are. You know, because it will include two different species playing together and being friends, because nothing is more cute than nature.

I am going to revert to astrology. From where Mercury now spins, whether moving forward or in retrograde, things are going to be different for me. Look to the stars for wisdom, I say. The heavens will tell us why we're not getting that promotion at work, or when it's a good time to get out of debt, or why it's important for us to not make any big decisions while the gravitational effects of other planets on our planet might be affecting everyone born in a certain month, but not others.

I've been wondering why I'm so ambitious, fierce, strong-willed, and mysterious. Now I know. It's because my mother and father fucked in January. Or, that could just be that ol' Scorpio-sarcasm.

The things that people will do to try to make themselves more interesting. We're told that women are more in touch with the celestial life, but somehow they are being sexually harassed in the world of astronomy. It doesn't make any sense, unless you factor in that all student astronomers are Libras.