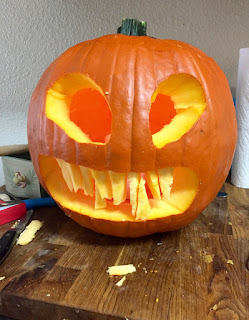 As you can guess, I don't usually spend much time decorating my house for the holidays. It does start to feel wrongish when you're doing nothing in the spirit of things and there's a four year old afoot. I have tried to explain the existential horrors to him. He wants skeletons and pirates and ghosts hanging from the doorways and windows. Pumpkins and pies and lots of chocolates. So, that's what we did. We bought a pumpkin and a pirate skeleton and a ghost skeleton. We cut the pumpkin to become the face of a ghoul of some sort. I fashioned teeth out of the pumpkin piece that we cut from his mouth and used broken toothpicks to keep them in place.

Not knowing what else to do I set all the stuff up outside, put a candle in the pumpkin, hung the skeletons and put some "Zombie Zone" orange tape around the front door as if something mysterious and terrible had happened, something that involved The Zombies. I would describe the current state of the apartment as absolutely fucking terrifying. Not a very welcoming place at all for the deeply superstitious. I left a Ouija board out to keep the Christians away. I only want things that will eventually scare white people, like democracy.

After we had completed the decorations we sat around out front and let the world of el barrio come to marvel at our native ingenuity. Midway through the day I noticed a few people walking down the stairs from above with handfuls of stuff. I stopped and smiled and nodded and tried to make eye contact and said, Hi!

Now, not to be an abject racist here... but... they move stuff in and out of the apartment on a reasonably regular basis, and there are lots of them. It's a Mexican-American family, so there's like 25 people that live there. Something seemed different today, though. There was a mood hanging over all of their activities. It eventually dawned on me - they were being evicted. I had heard threats of it for months. I'm standing there smiling at them like a retarded greeter at K-Mart, trying to interest them in my holiday decorations. A stinkin' fucking gringo, if ever there was.

Ah well, you can't win them all, and clearly they were not winning any yesterday, but the boy and I were. They were raining all over our Autumn-fest set design. I was prepared to shoot the opening scene from our unscripted horror film, or something. I totally had a boner for Halloween yesterday.

We went inside and I started dinner - a grilled ribeye steak, corn on the cob with garlic salt and butter, asparagus with seasoned olive oil, a few glasses of Cabernet Sauvignon to try and extinguish the unpleasantness dripping down from above. Later, as we were trying to go to sleep, I could hear the industry of last minute moving all around us. It of course saddened me. There are children living there, and they are friends with all of the other children living here. Also, a more selfish thought: now there will be an apartment renovation above me. They will destroy my peace and quiet so they can jack the rent up to the great heights where they believe it belongs. The family that was there, who knows.

I envy neither apartment managers nor tenants in these and all other situations. I only tend to side with the less fortunate, even if they have brought that misfortune on themselves. Why not? That's what I've done, also. A misfortune magnet, am I.

This morning we will have bacon, eggs, potatoes, toast and butter on everything. I want to make sure that my son knows how to live, before they put it on trucks and take it all away.