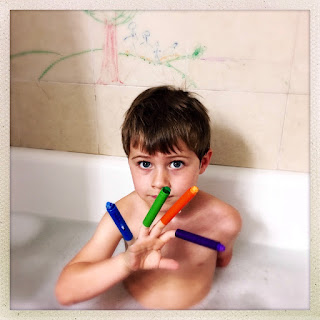 Who would have guessed? So much fun to be had just drawing on walls. Liberating - the most effective act of rebellion that I've conducted in nearly two decades. I am regaining my punk credibility through colored soap wax. Well, at least with the boy, I am. He thinks that I am a great visual artist and that he and I are two collaborators much alike and equally adored among our many fans.

The days of throwing up near garbage cans are nearly over. The raving up toward the stars. I wonder what pavement I'll take up issue with next, what curb will have offended my foot. What insistence upon betterment, as a cosmic debt to my youth, I'll come to expect from the stupid moonlit bricks. What wandering castigations will fumble from me next. What? What?