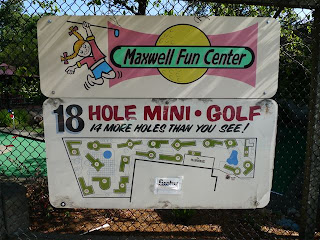 Nothing much to report today.  Found this sign advertising mini-golf.  There's a sentence found on it that you don't normally expect to see advertising anything.  If you look carefully at the actual shapes for the various holes I think you'll agree that this is one of the more one-dimensional mini-golf courses to be found anywhere.  There are about 6 that are nearly identical.  Rachel suggested a swastika shaped 18th hole might liven things up a bit.  Because what, at the end of the day, expresses the concepts of white-power more fully than mini-golf, really?

Selavy has written that the term "Bucket List" is his secret-ninja-kill-trigger-phrase.  Mine would probably be "Budget List."  It is a term that sends violent flashes through my mind.  I go blank and want to kill every time the phrase is uttered.

I went to the Sonoma Community center the other day and was being directed to find somebody's office and the man explaining to me where to go said, "You see that light through yonder window?"  This was done without any irony whatsoever.  Just a phrase used normally and naturally.  I almost shit my pants when I heard it.  I could have talked to him for hours but he was already done with me.

I tried to buy something at Whole Foods that didn't have an "organic" sticker and an alarm went off.  They explained that the product was a "plant" to catch people.

See, I told you there was nothing much to report today.  Why would I lie?