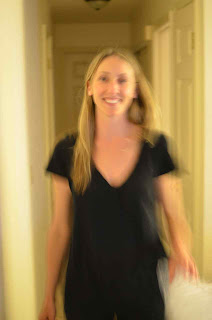 Big day today.  We move in.  It is supposed to rain for half of the day.  The idea that everything we own will be subject to both the rain and the bumbling hands of hired movers sends my passions towards the anxious.  But nothing can be done about it.  It is written.  The apartment has already been rented to somebody else, they move in tomorrow.  We move out today.
Felonious hands of the movers, I meant.  Some of my best friends are convicted felons.  They talk about politics less than most, and voting, but beyond that they are just peachy peeps.  I thought the idea was that once you had served time in jail then you have paid your debt to society.  It seems wrong that they have been deprived of civic participation in this way.  I mean, Ann Coulter gets to vote, and she was found voting twice on the same election in different districts.  If anything should deprive you of your right to vote it should be cheating at it.  But no, we live in the best of all possible societies.
Ann Coulter can be quite caustic, but she's also one of the few funny republicans in the spotlight.  I mean it.  If you read her website she makes some poignant counterclaims to the more left-leaning assumptions, and she occasionally does so with humor and wit.  I swear.  I've only read a few of her articles.  She's definitely a lightning rod filled with vitriol that explodes in viral grenade poison.  But there's the occasional telling and humorous observation mixed in that makes it worth the read.  I disagree with most everything she says but I still like reading it.  She has suggested that women should lose the right to vote, because if they did then a democrat would never win the White House.  That's funny.  She calls it her "pipe dream."
Get it?
Ok, enough about her for now.  More later.  People on the left hate her so much, and she makes herself very easy to hate, but I don't think most of them understand how much she's just baiting them.  It seems obvious, but just try to talk about her in any way but a defamatory one with a group of liberals.   They'll lynch you.
Ok, I must go. There is much to do today and I am one of the people that must do it.  Then, once I have done what I must do, the others come and do all the rest.  I have to go to work today.  Somebody's gotta eat the donuts.
.
Posted by Sean Q6 at 7:11 AM