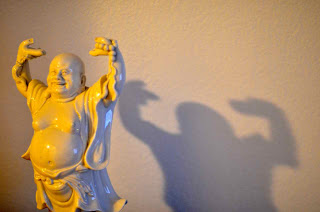 My body refuses to recover.  I have had a stomach virus for days, which has complicated other things for me.  Eating, for example.  My body just keeps getting weaker and weaker.  All I want to do is lie in bed all day, which is mostly what I have been doing.  For 3 days now I've been too lazy to go out to my car and get the book I've been reading.  It's a re-read so it doesn't matter that much to me, I guess.  I could start another book, one that I have in here, but it's easier to just watch tv.
The weather has turned for the better.  It looks very nice through the windows.
Selavy has outlined his version of our interactions today on his site.  It is not my intention to argue with him, even though he is wrong.  He is a romantic and he often sentimentalizes the past, which is the very definition of nostalgia.  I sometimes do the same, but nobody likes to be accused of such a thing.  He believes that he has found an escape route though.  Because he does not romanticize his past but instead romanticizes a fictionalized past of his invention, one which is deeply associated with him through its very creation.  There are times with him when it is as much a fetishization of the past as it is mere romanticizing.  But it works for him and it suits the tone of his site.  His audience seems to adore him for it.  But it would be very, very easy to pick a handful of his posts at random from the last few months and find strong currents of nostalgia among them.
Is it possible to speak of loss without a certain sense of nostalgia?
But I will continue longing for the present and the future, as well as fondly recounting portions of the past.  Much of the music I love is from the past.  I sometimes also romanticize the music from those other times.  It's easy to do.  Is that nostalgia or just imaginative appreciation?  I don't yearn to return to those times.  I only wish to fully appreciate them and their time of creation.  They are like postcards from another time, postcards that require some participation for fuller enjoyment.
I think it was the mention of 80's music that caused all of this.  The music of the 80's must truly anger him.  It was perhaps a time that he finds contemptuous and it is bothersome to him that I might have felt otherwise.  Who knows.  I say none of this to argue, only to try to understand the lines that divide the crime of nostalgia from what is only fond memory.  I didn't enjoy the 80's as much as I should have as it was happening.  Listening back now I find more and more to like about the time.  Some of those bands certainly sounded like they were having fun.
Ok, I retire to the bed now, along with the pup Barkley, where we will discuss politics, and the many merits of sentimental longing for the past, or lack thereof. 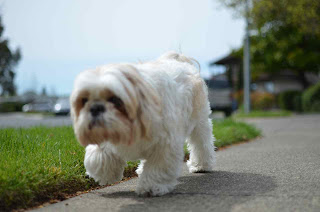