Morning in the garden of Bok Choy 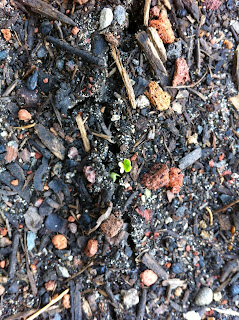 (budding flora pic by Lisa Murray)
In addition to all of the other many changes we have undergone we have also decided to become vegetable farmers.  Sort of.  I tried to get the farm to exclusively plant tobacco but so far no luck.  Then I went for opium, again no love.  We all pitched in a bit and prepared some beds for planting at our friends' place around the corner.  The Bok Choy that I planted less than two weeks ago has already sprouted.  The first amongst many, and another victory in a series of undisputed triumphs.  I'm thinking of running for the office of president, on the self-governing ticket.  This morning we will very likely head over to the garden to announce my candidacy.
Think about that word, candidate. Are they meant to be candid?  That's pretty much how they all strike me.  Just straight-shooters trying to single-handedly get America back on its knees.  That will be the premise of my campaign, that the other guys are not true candidates.  I will further clarify this point by making up a freestyle rap on the spot to my own beatboxing, something that sheds light on the real problems facing America.
What is up with the working class, right?  Can I get a work-work...? Boom....
Ok, gardening.  I don't know anything at all about it.  But it fits into my new vision of myself.  We're going to look for a pair of overalls today, just in case I decide to rape some livestock this afternoon, or cover myself in Milorganite.  I wouldn't want to look awkward doing so.
Nope, back to gardening.  Having no knowledge of a thing can make it difficult to write about.  Though I'm always willing to give it a shot.  I'm having a trying time adopting my usual air of authority this morning.  I'll let the tea trickle into my many indignations.
I'll be back.
I wonder how difficult it is to isolate morphine from the opium poppy, as an alkaloid.
See, I should have bought that set of Encyclopedia Britannica...  I looked on the site yesterday. There's less than 500 sets left.  $1400 each.  Anybody?
I can pay the loan back in drugs.  If I can get that set I see no reason why I wouldn't also be able to take over the world.  It might only be the "It's a Small World" ride at Disney, but that's a start.  It's a damned lucky thing that Disneyland wasn't built until after Hitler was dead.  He would have absolutely adored a world so cute and easily conquered.  He might have felt just like Michael Jackson.  And isn't that how we all should feel sometimes....
Ok, enough.  I'll be back later if I can get the time.  I don't think I'll be able to write tomorrow.  Cato is trying to get me to drive into SF to listen to guitar players while we're on mind melting drugs.  Neurons searching the synapses for heaviosity.
We'll see.  It's a Monday.  Am I getting too old to start the week with hefty psychedelics?  Say it isn't so...
Explosions in the Sky they're called, the band.  They sound far out, man.
Maybe I can get them to buy me a set of encyclopedias, for research.
.
Posted by Sean Q6 at 7:50 AM