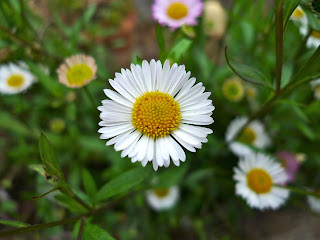 Nothing much to report. They have assigned me an early shift at work today.  With little sleep I will soon trudge off to do whatever it is that needs to be done.  They prefer that I am enthusiastic about it all as well. My head is on the chopping block there at work.  They have a guillotine with my initials on it.  I have been warned.  It is yet another in what seems like a lifelong string of warnings.
Tonight I am supposed to go into SF to attend a rock concert of some sort.  It is a band that seems to pride themselves on the eschewing of vocals in their music.  It is all topographical guitar symphonies, produced by heavy and layered effects and lots of practice in the art of emoting.  We'll see.
I will need to take a shower this morning, I guess.  There is no shower curtain. I'm sure that is my fault too.  It could have been bought yesterday but I spent half of my energy making sure that it didn't.  I worked for six days straight, had one day off in which I had hoped to settle into our new house and make it feel livable, now I return to work for four straight days.  Life can be circular in its absurdity.  I would say that there's never any end to it, but that is far from true.  It is, at best, circular.
Speaking of, I went over and witnessed the garden where the Bok Choy is splitting the earth with its emergence.  I know that it's one of the simplest things ever and occurs many places the world over.  But it is an amazing thing to engage in yourself.  These seeds were hidden away in a little paper folder. We put down some soil.  I made an indentation along two parallel lines. Dropped the seeds in.  Now they emerge, fighting for resources, only days later.  It is truly startling and yet one of the easiest things there is, in some places, where the conditions are right.
I am going to take great satisfaction in eating the winners. 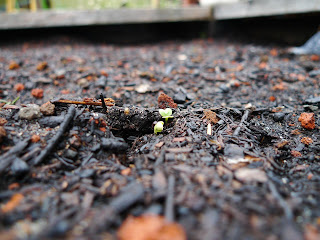