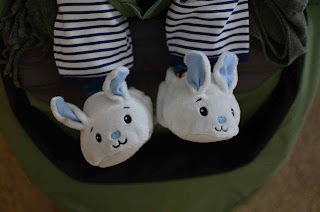 Well, we did it.  We went to Easter Mass.  Rhys's first step towards the foggy mumblings that will either shadow him or light his way.
So be it.
St. Francis watched over us, the patron saint of fuzzy bunny shoes.
I was always more interested in St. Augustine, the patron saint of brewers and printers.  Beer and Books.  My kind of guy.  When I tell people that Augustine was black and from Africa they look at me like I'm out of my mind, or just taunting them.  White people do, I mean.  I'm afraid to talk to black people about black people.  No, I'm kidding.  I just prefer to be drunk or drinking when doing so.  Then, and only then, I'm an authority on all issues, especially the sensitive cultural/historical/religious ones.  I'm a god-damned expert then, on all repeatable issues.
No.
If they happen to know what the "City of God" is then somehow the author being black doesn't quite fit into their conception of him.  I suppose many have forgotten, or never been taught, that a fair portion of North Africa was Roman for a time.  When I was very young and under the religious jurisdiction of my mother she used to take us to a Catholic church that was his namesake.  There were several paintings and depictions of Augustine in this church, none that accurately reflected the color of his skin, which matters not at all to me, other than in retrospect and in others' denial of it, etc.   It is found often and everywhere.  It's much more challenging to find a painting of him that honestly reflects his African heritage.  Imagine that.
His skin was most certainly a dark brown being from what is now known as Algeria with family history reaching back more than 100 years in Africa.  I grew up believing him to be of European descent, if not being from the Vatican City itself.  The Holy See, originally a circus ground begun by Caligula and completed by Nero.  I only found out in my early 20's that the depictions of Augustine that I had grown up with were hardly accurate considering his mother was of full African descent, his father was likely a Berber.
I say all of this to remind my readers that I grew up in Florida, during a time when issues of color were still taken very seriously by some, and alternately very seriously by others, though in a wholly different, near opposite, way.  Part of what motivated my decision to leave Florida was based on the quotidian bigotry found there and still on display in most places.  Little did I realize at the time that I was out of the frying panhandle...and into the friar.

New York is quite possibly one of the most bigoted places I've ever been in my life.  I have witnessed more open and forceful intolerance there than just about anywhere else I've been.  It is a myth that New York is a melting pot.  New York is at best a paella, or fondue.
Well, this isn't what I sat down to write about at all.  But rest assured that there is as much bigotry in NYC as anywhere else you've ever been.  It's just divided pretty evenly between many more groups, so each citizen tends to feel the effects of it it much less as when it is divided almost exclusively between two groups, white and black, as it tends to be in the south.
In California there is a different kind of white/black divide.  It is more white/brown here.  Nobody talks about it but it can be easily felt.  Mexico is California's Africa.
There are two California's: the haves and the no lo tengo.
Aye, Happy Easter, Pilgrims.

The partisans are everywhere, else how did we ever get here? 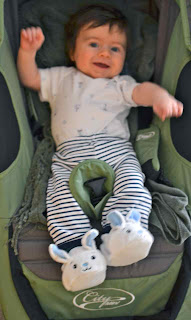