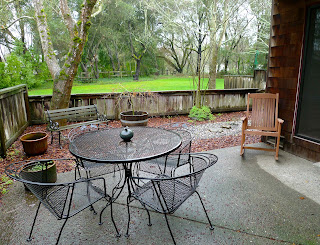 (A rainy view of our new back patio)
We bought a house this morning, sort of, it's a town-house.  We signed the financial documents, we are waiting for the money to hit the escrow account before we get the keys.  If all goes well we'll own it sometime early in my 73rd year of life, AD 2042.  There is a way to own it sooner.  By increasing a certain payment, probably our mortgage, by 3% each year we save a lot off the end.  It's math.  I was barely listening this morning when the tactics for accomplishing such a task were being outlined to us by people who know, old people.
All I could think about was myself at 73, Rachel at 66, and Rhys at 30.  Perhaps some yet unnamed, unformed creature still in their 20's.
Strange, that.
When discussing financing that stretches out for the remainder of your life, or perhaps even further, it is impossible not to try and imagine what your life will be like then.  You realize that each detail not carefully considered now can balloon into nightmarish numbers later on.  Debt.
We do all of this to build equity in the home.  Everybody talks about "not throwing your money away on rent."  But I know quite a few people living in Florida that would love to have had an apartment rather than the home that they're now trapped in when "the bubble burst."
But today is not a day to consider such things. We are to believe that the housing market will rebound and that the place we bought today is not an investment as much as it is a home for us to live in.  The investment aspects of it are truly secondary.   We did, after all, get a good interest rate.
Thanks, economic crisis!
It is the first home that either Rachel or myself have ever bought.  That part of it is very exciting.  The idea that we will be homeowners together.  We can do as we wish, with the Home Owners Association written permission.  It's a little bit like New York in that way, but only with a dirty river not far away.
Or, there's grass there.
If you ever want some insight into why the financial markets collapsed, and I don't mean the greed of the big picture which has been outlined by many, but the incompetence of the little picture, then simply take a loan against your 401k to buy a house.  We have had to do most of the work for them.   Right now I am listening to Rachel discuss the expected loan against my 401k and, though I have heard her make many calls like this before, she is just now being told that we have not filed all of the appropriate paperwork. But Rachel is swift and clever, she pointed out to the representative the spot on their own website that provides information disagreeing with everything they are now telling us, as well as documenting for the record the last communication we had with them when they informed us that all was in order.
The important thing to note here is that something was holding up our loan, we were not made aware of it.  Had it not been for Rachel calling then the process would have been stalled even further.  They are asking us to provide proof that we have already purchased a home. We've tried to explain that the reason we're borrowing from the 401k is to do so, and that one must happen before the other, there is a one-way temporal relationship between the two events.
The "ball" could not be any more "on their side of the court."
Rachel has had more extensive dealings with financial institutions than I have.  She assures me that the one facilitating this loan for us is one of the better, if not the best, among the various banking organizations.  At least in terms of customer service, that is.  That's the problem though.  The service and the experience completely suck.  Had we not called this morning then we would have never even known that they had stopped the loan process.  They make us verify our email addresses, mailing address, and phone number every single time we interact with them.  So, we're pretty fucking sure they know how to get in touch with us.  Yet something prevented them from doing so.  It's simple, they have my money, we do not. If we had their money then things would be different.  The next time a debt collector calls I'm going to make them verify all of their contact information, in triplicate.
It's difficult to listen to Rachel on the phone with these people while writing this.  It's making me angry, very angry.  No matter what it is we've already provided, they want something else.  It is very easy to understand why people lose grip and begin to suddenly act with extreme disregard and loss of rationale.  I just suggested stabbing somebody in the neck, but Rachel doesn't see this sort of talk as being supportive.  She's "shushing" me.  But I mean it.  I want to kill, and soon.
Ok, I took a breather.  It didn't help much, but I took it anyway.  Life is absurd, banks are organized cruelty mated with demonic greed.  We're all supposed to just accept it.  I hear Rachel saying that our closing will be delayed now.  It seems inevitable.  Unstoppable.  So be it.  Namaste.
A lesson for all of you.  Never rest, always worry.  When something is important call twice a day to verify that others are doing what they are charging you to do.  Be vigilant, always be ready to transmute that vigilance into violence.  Never apologize.  Fight the good fight, etc.
The walls will always fall.
.
Posted by Sean Q6 at 12:31 PM