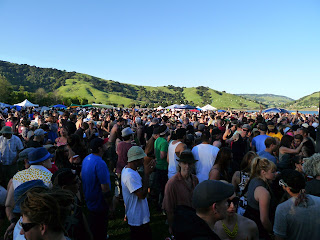 I got an email after last night's post advising me to take a walk and get some sun on my face.  Do not worry, it was just an experiment in words.  There was perhaps a kernel of truth in there, but mostly I was just practicing saying things differently, to see what will happen, to see if anything interesting emerges.  Sometimes there is little or no relationship between what I am writing and what I am feeling.  That wasn't entirely the case last night, but there was some embellishment involved.  It was an exercise in nonsense, to see what foolishness might leap out.

I am trying to find a way to say something without sounding moralizing, or condescending, or as if I'm only denouncing.  But yesterday I noticed another difference between the people in the SF area and the people in New York.  I went to an outdoor party, a sunset party, one that ended at 7pm.  I went there after work and only arrived for the last 45 minutes or so of it.  There were many people dancing and enjoying the music.  People were stumbling from one place to another presumably enjoying themselves.  There were lots of children there though it was not exactly what I would call a children's event.

I saw one man stumble past mumbling incoherently, stepping on other people's stuff with seeming obliviousness.  What appeared to be his son was swaying from one side to another upon his shoulders, pitching dangerously both forward and back, from left to right.  Later I saw them again.  This time the son was being held by the hand and the presumed father was walking him along by the portable toilets, not in much better shape than before, but less dangerously so with the child.  Neither father nor son were wearing shirt or shoes.  It was a free festival, you see.  He was perhaps teaching him how to return to nature.  To get back to his roots.

The music stopped promptly at 7pm and they made a few announcements.  One was that there was a 3 year old girl at the dj booth who had lost her parents. They announced her name and we were left to assume that her parents would be found and reunited with the young girl.  I imagined the girl to be somewhat frightened in such an environment, separated from her parents.  Also, I thought it interesting that they had presented the situation as one in which her parents were lost, not the girl.  Understandably, she was not lost, the voice on the microphone knew where she was.  It was, in truth, the parents that seemed to have wandered off.

I realize that I just had a baby boy and I am probably overly sensitive to these situations right now.  But I am not blind or stupid either.  I have argued both for and against bringing children to open air parties in the past, even Burning Man.  But my arguments were usually based on direct observation of how the parents were treating having children there with them.  It is possible to be responsible in these settings, and one need not feel as if their lives have ended because they have had children.  But that's not exactly what I saw yesterday.  I saw something very different.

I was afraid to say anything to one of my closest friends who was standing there next to me.  He was high on a bottomless cocktail of designer drugs and had been for days.  I was afraid that he would cite it as some new morality that I had adopted in some twisted attempt to tell the world how it should be conducting itself.  Something that I sometimes do.  But he agreed and even more fully felt that it was no place for children and those stumbling about to be caring for children - or not caring for them, as the case mostly was.

They seem to insist on the naturalness of what they're doing because they've included their children in their activities. What could be more natural?  Practically a family function.  But there were a few thousand people at this party and everybody was getting in their cars and going home.  It just struck me as an unnecessarily dangerous place to lose a child.  As much as these people want to feel that they are all part of one big family, some families also include a wicked Uncle Ernie or two.

You don't see as much of that sort of thing in New York.  They employ a system there known as "babysitting" in which the child stays home with a person capable of caring for them and ensuring their safety.  So if the parents want to go stumbling into portable toilets, or wandering off towards the lake to pursue fading sunbeams, then the child is not left in the care of thousands of strangers perhaps also pursuing their own ideas of sunbeams and where they might be found.

Is that moralizing?  I suppose it is.  I'm just not so sure I agree with the seeming premise here that, "It's cool because we're doing it."  I suppose my moralistic modification would be, "It's cool if you're doing it well."

Or, "It might be cooler if you were cooler."

Also, the pictures from last night's post were from Cato.  I wasn't in the mood to credit him last night, and told him so, but wanted to do so today.  They were taken with, and processed with, an iPhone.  It's morally wrong to present somebody else's work as your own, I'm told.  Except when a dj does it... of course.