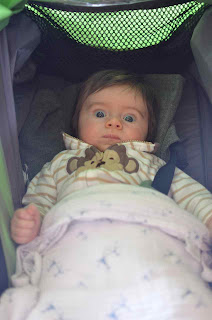 I had been warned. I had been told to prepare.  That once the baby was here I wouldn't matter any more. Several of my closest friends told me to brace for it, that it's a big shock to the ego.  That the woman you love and have done all that you can for is suddenly in love with somebody else.  It's not quite jealousy, you love the little guy too.  But there is a distinct sense of descent, of loss.  Not only am I not the most important guy in this relationship any more, but if I don't fall in line quietly and happily with all of these new changes then that's a clear sign that there is something wrong with me.
My place is now somewhere between Barkley the pup and where I was, or thought I was, towards the top of the totem pole.  Nope.  I'm suddenly the long square head that's visible just above ground level, not quite the base, but right above it.
I won't trot out all of the details, this is not the place for it.  I'm not even sure if there is a place for it.  When I have hinted at some of my feelings the responses I've gotten fall into two categories.  There is only the "Don't be selfish" response or the "What did you expect?"  Well, I don't feel like I've been selfish, at all, and I'm not quite sure what I expected.  But if I would have described this feeling, in advance of the child, with the terms that now seem clear to me, then people would have accused me of some other, greater wrong at that point.  I'm certain of it.  Everybody described the experience with the, "You can't possibly know until you've been there" type reaction.  But what they mean is that you can't or shouldn't be honest about it.  Once you've been there you'll understand why.  Complete honesty about this experience is valued by none.  What is valued is the strained smile of budding patience and fatherly understanding.
Or, even other inner principles that have been in existence but perhaps had atrophied from dormancy, sloth.  As much as it is a new experience it also reminds one of qualities long rested, and even less practiced.  I almost feel like I'm in perpetual Sunday school.  Best behavior, no booger picking, etc.
I say none of this to hurt Rachel, or to question her enjoyment of motherhood.  She's not to blame, at all.  It all makes sense, I see it.  She is very happy with these changes and does not see them as limiting in any way, but rather the opposite, that our lives will now open up from this point forward.  In some ways I see that this is true.  But that doesn't blind me to the other aspects of it.  I see now why people invest into their homes, creating a comfortable space of suburban enjoyments.  If that's where you are going to be then it makes sense to enjoy what you have there.  I have books and music and guitars and cameras.  The internet.  Soon we will have a baby grand piano.  I have begun to look at flat screen tv's with a different eye.  I have a new interest in any noteworthy television programming.  I downloaded the first season of The Wire on Selavy's recommendation.  We'll see.  Rachel says she doesn't like cop shows.  I wonder if I do.
Who knows, maybe I'll become a cop now.  It doesn't seem impossible any more.  Lots of things seem less improbable now, like Rachel says.  If only I wanted to be a cop...
Soon I will have a tool shed filled with power tools. The garage will be my sole domain.  Though the place we've bought doesn't have one.  The imaginary garage will be my private place.
I suppose it's just a transition that all new fathers must go through.  The recognition that you are no longer leading your life, that you barely even have a vote when it comes to some things.  That there are expectations of you and the quiet fulfillment of those expectations is the only indicator of happiness that anybody wants to hear from you for a while.
It's quite an adjustment.  What did I expect?
.
Posted by Sean Q6 at 11:42 AM