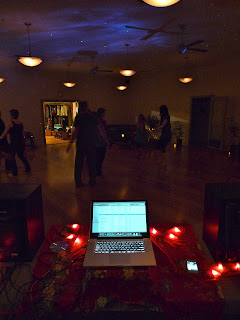 The clouds escaped in my sleep.  This morning it is clear again, and cold.  Spring still hasn't hit just the right combination of clear and warm.  Soon.
Last night I played the part of being a dj.  It was an 80's party at my friend's yoga studio.  It was 2 hours of time machine fun.  I brought my speakers down and played off of iTunes. Not precisely dj'ing but I was playing tracks again for people dancing, putting them in the order that I thought made the most sense, at the moment.  It was nice to not have to wear headphones, the ubiquitous dj fashion accessory.  Nobody offered me any cocaine, which was kind of a drag, but everything else was cool.  I never tire of watching people dance, especially white people.  No, I only kid, again.  I was texting Rachel at home telling her that I had done some cocaine and I almost had her believing me.  I mean, can you even imagine....
As for white people, well, they are fun to watch, truly.  They are imaginative and expressive when dancing, some might say a bit too much.   But don't worry dear readers, I was dancing too, for a little bit.  I wasn't going to be one of those dj's.... I remember many years ago at a club in Florida.  I drove up with our local dj.  It was the first time he was guest dj'ing there.  As we were standing at the edge of the dance floor I asked why he wasn't dancing.  His response struck me as strange.
"It shows approval."
Sure, I guess it does.  The world of dj'ing sure is an odd one.  Many years ago I would often write about it for an online magazine out of Amsterdam that my friends maintained.  They found it novel that a dj could be so openly critical, even contemptuous, of dj culture.  It was part of what ruined my dj'ing career, but I had a lot of fun doing so.  I jokingly blame them for destroying my vocation, but we all know who accomplished that singular task.   I thought I was being "punk rock."  I quickly found out that assuming a punk rock stance is not rewarded by those with whom you take the stance against.  I was not nearly as charming as I thought I was.  Doing cocaine and playing poorly does not necessarily a punk rocker make.
I learned my lesson.  It shows disapproval.
.
Posted by Sean Q6 at 8:55 AM