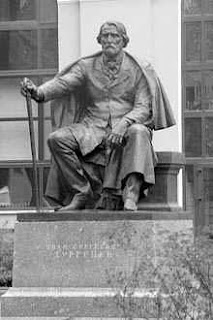 (Turgenev)
I miss sushi.  I am recovering from a stomach virus and I just went to the grocery store and bought a plastic carton containing what they claimed was sushi.  It was not.  It looked similar but the color of the fish wasn't quite the same, and when examined closely the rice was not the same grain, it was an unholy seed.  This synth-rice was developed by the Monsanto corp., Halliburton,  I'm certain of it.
I ate it all, but only out of longing.  There are countless deli's you can walk into in New York and buy actual sushi for anywhere from $5 to $10 a roll.  Imagine that.
Sushi is my favorite food and there is none here.  None here to speak of anyway. None here to speak well of, anyway.  Let me be more clear.  There is a sushi restaurant here.  Everybody has advised us not to go there, that it is very expensive and not very good.  The closest sushi place that is worth going to is in Santa Rosa, about 35 minutes away.  In New York the closest sushi place that was good was 3 minutes away, on foot.  If you wanted great sushi that was a 5 minute walk.  To be clear, we live near the Pacific coast now.  I had thought that sushi would have been knocking on our door like the Mormons, to be eaten.
The stuff I got today was made from used band-aids with a brightly colored fish flavor paste spread across it, generously.  It tasted like what a flavored japanese condom might taste like, rubbery and wrong, yet colorful and somehow festive, packaged and purchased, forever confusing the term condiment with vending.
Rachel and I had much better sushi in St. Petersburg, Russia.  Honestly. There was this cute little place that put the dishes on a conveyor belt and you just picked what you wanted, they counted the dishes - both the colors of the dishes and the number - at the end, and that's how much you paid.  It was delightful, and the fish must have come in from the Gulf of Finland, or the Baltic Sea.  It was great, we ate there twice or more during our short time there.
We did something very stupid in Russia.  We were looking for a taxi and we got into some stranger's car who happened to be driving by.  He pulled over and motioned us in as we were trying to hail a cab.  The streets were deserted and we were across the river from the Nevsky Prospect, a long way from home.  We negotiated our way back towards our hotel, drunk.  We were showing this stranger where our hotel was by flashing tourist maps and gesticulating wildly as the white night and the treetops passed us by.  He grinned as he ran the red lights for us.
Once we realized that he was driving us back to our hotel to rob us further, and more completely, we panicked.  I started babbling something in semi-Spanish with an occasional Asian word thrown in about our hotel being a different hotel, and where we showed him before was where our friends, The Polizia, were staying.  He smiled a knowing smile and drove on.  When we got the the hotel I held out all the cash I had on me, hoping this would end the robbery for good, before we had to be shamed and raped further upstairs.  He took a few small coins, smiled, and waved us on.  He waited for us to get inside the hotel safely before he drove away, waving.
Angels, everywhere, I'm told.
I turned to Rachel and said, "That fucker just took us for almost 75 cents...."
Close call.
When I took Rachel to see the statue of Turgenev around 3am we almost did get robbed, truly.  We rounded a corner and there was a group of aggressively inquisitive youths, up late, and demanding to be acknowledged.  We ran..... we escaped.
That was our partial story of Russia, running from ill-informed foreigners.
St. Petersburg was one of the worst cases of jet-lag I've ever had.  I slept, or tried to, all day long.  At night, if it can be called that during "white nights," I was wide awake and wanting to roam the streets of mighty St. Petersburg.  Dragging Rachel along to show her the statues of Turgenev, Dostoyevsky, Tolstoy, Goethe, Gogol, Peter The Great..... To bars where food and beer were served all night, and music was played quietly as the night wore on.  I wrote a quick post-midnight poem on the banks of the Neva.  It is lost now.  It was an homage to Jim Harrison, suggestive of loss, and the loss of memories.  Never nostalgic, merely plaintive for a past shared, now mostly lost.

One night at Selavy's house I read aloud a poem from a book on his shelf, one of my favorites.  He and his girlfriend hated it.  That's right, he once had a girlfriend.  Just because he has an interest in literature means little, it admittedly means perhaps even less to him, to hear him talk of it.  To endure him daily recounting his past loves, his longings.
Because literature is, if nothing else, an accurate and artful accounting of nostalgias, past and present, if nothing else, of nothing else.
.
Posted by Sean Q6 at 4:49 PM