Implosions under the Sea 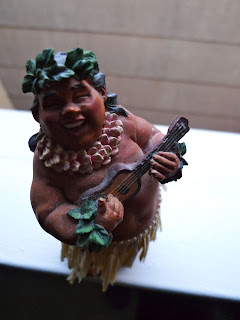 Very little can make me feel as old as going to a rock concert, or as fat.  I suppose there are a handful of instances that might serve that purpose to an even greater effect, but not many.  I could look at Napster, or talk fondly about the 80's, or have a mild stroke, or shit my pants.  But that's about it.  I just walked outside and told a kid to get off of my lawn.  It felt right, and good.  I also yelled at a car to slow down while I was out there, picking up the newspaper in my robe and slippers, with white socks on, pulled halfway up my calves, barely covering my pale withered legs.  Damned hippies...
Speaking of, my hip hurts.  I think I broke it when picking up the paper, or at that infernal rock concert last night.
I was peer forced to ingest some new designer drug, to aid with music appreciation.  To see and hear things that were not actually there, or to augment the things that were.  I think he said it was called "madonna."  I gobbled mine with a beer, after having drank two bottles of wine between us.  I don't remember.  The night was a loud, noisy blur, with many musical valleys and crescendos.  The band only played one song but it was a good one, with lots of effects and the occasional well timed key change.  It was written primarily in a minor key and lasted about 2 hours, give or take, but maybe much more.  Who knows.

The band was comprised evenly of all long-haired guitar players who stood shoulder to shoulder, axe to axe.  There was also one drummer that nobody seemed to like.  They all appeared to be very proud of their Texas heritage.  They prominently displayed a state flag, hanging over a speaker on stage, presumably not as a threat, though we've all been warned about messin' with Tex-mex, etc.  It was either a Texas state flag or a Puerto Rican one.  I can never tell one from the other, and the drugs didn't help much.  Fuck, I might not have even gone to a concert last night.  How would I know?


I don't think that the drug they pressured me into taking was even illegal.  What was I thinking?  "Never ingest a legal drug"... that's my motto-operandi.  They're never worth it.  I woke up feeling like my insides were made of asbestos, wrapped in non-permeable plastic.  I was like a soft-boiled strontium egg, with a temporary atomic number.  Courtesy glow, it's called.

I can smell it all coming out of my pores this morning.  My urine was blueish, glowing.  Sinister stuff.  If the FDA hasn't taken the time to deem something as being Schedule I and "very dangerous" then it almost always is, dangerous that is.  Nature is much worse than the lab, much.  The only things that should be illegal are the things they haven't bothered noticing.  Natural drugs scare me and make me edgy and paranoid.  Very strict laws against something are always a sure sign that it's something possibly worth seeking out.  It's the tell-tale giveaway, a prison sentence usually means "good drugs."

Right?  Name one great drug they haven't made illegal. For every one of those I can name twenty that should be.

The stuff even looks like asbestos, a little bit.  Asbestos is a naturally occurring substance also, to give you an idea of how dangerous nature can be.  I still want to market a drug called "Cobra Venom."  I'd sell it at Whole Foods, tell people that it's "striking", etc.
Here, just have a look at madonna.  It looks much like I feel - pitted and glowing orange and red on the inside.  Ready to seep and melt into the world around it, yet somehow concerned with overtaking its oval-esque mate. 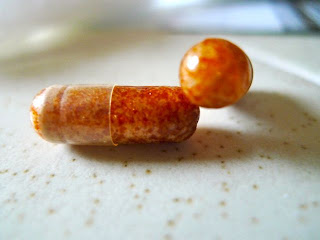