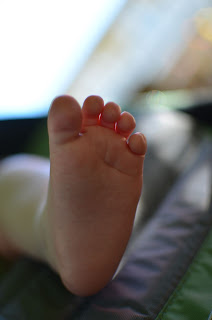 I'm not opposed to a baby's crying.  I'm not exactly a fan of it either.  But it doesn't bother me the way that it seems to bother others.  Nobody is an ardent supporter of a baby crying on a plane, but I understand.  The pressure in the baby's ears changes and they don't know how to release it by yawning, or otherwise.  It causes pain and they cry.  I get it.  There's no use in looking about either angrily or dejectedly at the parents of the child.  They are as helpless in the matter as you, and each of us together less helpless than the child.  There are many times in life when I wish that my screaming would be an appropriate response to whatever is happening.  It's usually not.  I've learned that.

There is a marked difference between being able to withstand the sound of a baby crying on a plane and being responsible for a baby that's crying, however.  That difference is what I am coming to terms with lately.  Rachel has gone back to work and there are short passages in the day between when Rachel leaves and the babysitter arrives, or when the babysitter leaves and Rachel returns, that I am expected to entertain Rhys and keep him happy, smiling, and bouncing.

This new territory is what perplexes me.  I understand that men are not always "naturals" at this.  But I am a complete klutz, a dunce, a lummox.  I try to ape the things that Rachel does with the boy.  I put him in the "baby-bjorn" and I walk around the house singing to him, bouncing him gently on my toes, or rocking him lightly when he is calm.  Holding him close and whispering to him in his ear.  Never stopping for very long or letting his building swells of dissatisfaction overtake him.  I offer him his "binky."  I'll fill his ears with the gentle sounds of me "sssshhhhhuuuussssshhhhhhhhiiiinnnnggggggg..."

None of it works.  Within minutes he is wailing and I am either cursing the babysitter, or Rachel, or traffic, or anything else I can assume is the cause of this 15 second delay between when they are supposed to be here and when they actually are.  It is a hell, of sorts.  I imagine the netherworld to be filled with the sounds of the infantile wailing, and the others there crying for mercy.  I think Dante wrote about the ring of hell that includes those trapped in an eternal daycare.  Just babies wailing faces emerging from the dark, eternally, with the insistent demands of infancy, expectations that can never be eased.   The infinite wails of nascent life.

Several years ago my friends had a baby and invited me over for a dinner party at their house shortly after, while the child was still an infant.  I was my usual excitable self and as the night wore on the host and myself got into an argument of sorts in the kitchen.  It erupted somewhat unexpectedly and ended likewise.  It involved only a few quick, punctuated sentences, reaching my ears as abbreviated revelations. They were retracted as swiftly as they were put forth.  But each successive shock made its point, reached its target, and communicated its message to its intended audience, as it were.  Me.  The nature of the argument, I see now, was the urgent need to let a baby sleep when it can.  It is the only relief one gets from the perpetual demands of infancy.  I've learned that now.  Point taken.