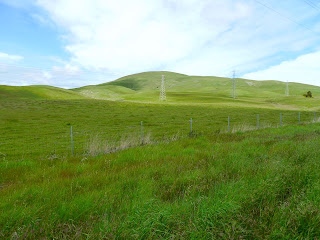 Up before dawn, already beaten and bewildered by the day. They say that you can not "catch up" on sleep, that it must be gotten regularly, that there really is no way to make up for lost time by oversleeping.  But that can't be true.  The other day I slept almost 10 hours.  Not consecutively, but each time that I woke up I would go right back to sleep, out of exhaustion.   Finally being able to sleep acted upon my body like a drug.  I just kept going back for more.  I didn't care about anything and was not about to change what I was doing.  I became almost angry at the idea that anybody would make me do anything other than sleep.  But that anger did not prevent me from going back to sleep, instead it just drifted away.

The hill pictured above is one that I've mentioned before here.  I want to hike to the top one day and take pictures of the valley, and of the bay, where the two meet.  I have no real reason to do so, but it is something I think about quite often when driving by.  I have never seen a human on the hill, though often there are herds of livestock.  If you look carefully at the image below you can see a flock of sheep at the top.  (Insert sex-with-sheep joke here).  But the hill is very inviting and I imagine the view from there as being somewhat unique.  It must be.  It is the last big hill at the end of one side of the valley, where the hill range meets the bay.  The hill can be seen from many miles away.  On the drive home I can see it across the bay, from the highway.  It seems just as alluring at a distance as it is up close.
A close friend's father died in a terrible helicopter crash not far from this hill.  It was over 20 years ago now, on my birthday in 1991, but the effect of this loss can still be felt in him.  He was a young boy at the time, about 14 years old I believe, years before I knew him.  I think of it often when I drive by this area.  It happened during a storm in which visibility was very low.  The helicopter hit a power line tower, one that many people in the area fought against when they first went up in the early 80's.  They were supposed to be lit with flashing indicators to prevent such a thing from happening.  The people who fought the towers going up likely also fought the intermittent lighting systems that were meant to be on them.  It would seem that they won with one issue though not the other.  The first issue would have prevented the accident, the second likely contributed to it.  Odd, that.
His father had accomplished many great things in his lifetime and was engaged in a continuing philanthropic effort when the accident occurred.  He was enlisting a rock band to perform at a charity show, his passion.  His passing away produced a massive benefit concert that many people in the area still talk about to this day.  300,000 people attended the show.  It occurred to me that I do practically nothing that could be considered charitable.  It is not that I don't care, it is only that I am dedicated to keeping my life from becoming one that requires charity.  I always seem to be struggling to keep myself just above the poverty line, though I know this to not be factually true.  It is what I tell myself.

I once flew in a helicopter over the Grand Canyon with a friend.  There were elevated flattened tops in some places where millions of years of erosion had eaten away all that surrounded the area but left the ancient earth flat as it was before the beginning of the formation of the canyon, when the river that became know as the Colorado was at, or near, ground level, 65 million years ago.  I believe there was an Indian name to describe these flat elevated spaces, though that name now escapes me.  The helicopter pilot pointed out one flat spot high above the canyon bottom that was as large as the island of Manhattan, he claimed.  Presumably it was to give us perspective, in the event that the actual canyon itself was not impressive enough.  He wanted to be sure we understood that this geological event dwarfed much that man might have accomplished since.  It felt unnecessary at the time to unfavorably compare the size of Manhattan to the size of one visible portion of the canyon.  But the moment became memorable because of it.  I often thought of it when flying home to LaGuardia, as the city would float by beneath the plane's seemingly slow approach.

Distance and proportion give perspective, especially across time, often in an inverse manner.  This hill that I want to hike is not the largest in the area, nor does it seem to be particularly challenging.  Doing so would perhaps help nobody but me, and even that is doubtful.   It has just been some time since I have wanted to hike a hill by myself, for no reason other than to produce the feeling in me that I had nothing better to do, even if that isn't true, nor ever has been.  I just want to waste a day differently, to find a new way to feel free from time, if only for that moment. 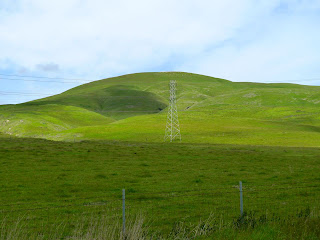