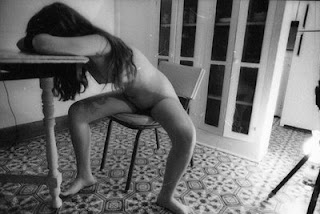 Well, things don't sound very good for my old buddy Selavy, no matter how you look at it.  It's all too bad.  It all sounds very bad.

I had honestly hoped to one day move into his house and live off of the fat of the land, milking the dairy cows fresh with my mouth, running raving loose in the chicken coops, gorging myself on animal fats, bovine teat and boar blood... fattening myself up for the eventual aging process.  That was my retirement plan, anyway.  Now, he will have to work to support me and it will make me sad to watch it happen.  I might not like it, or him, nearly as much.  That is my fear.
Well, I had better not get too ahead of myself here.  Let's wait and see where the chips fall.  Maybe I can convince him to spend his savings on something that will provide us both with a little more long-term security,  like lottery tickets, handguns, or firecrackers.  I hear that they're all tax deductible now if you file as a professional gambler or patriot.  If you live in a high crime area, near immigrants, or with casinos, you can itemize your deductions.

Isn't that a great phrase ?  Who, at the end of the day, or fiscal quarter, is not itemizing their deductions?  The only thing that most of us have to lose is items.  Only rich people get to deduct their idea-money from their taxes.  It's called the pretend-profits deduction provision.  Just claim that you're disappointed, and prove that you're wealthy.  "It's easy,  it's the IRS.   Any loophole could be your hole."
But my focus tonight is not on the orifice iniquities of our tax code.  It is with the possible upcoming needs of my dear friend, Cafe S.


If we buy cocaine in bulk quantities, the markup is actually quite astonishing.  It is with most drugs, illicit or otherwise.  It's only the regulating of the illegal distribution chain that presents the more serious investment issues, especially as it pertains to racketeering, which is still considered illegal here in the US, somehow.  I've got a guy we can talk to.  If we can elevate it to corporate levels then we should be fine, it's called laissez-faire.  Only a god-damned lecher would question a foreign phrase.

No, I only kid.  Not only is it too soon to make these jokes, it might also be too early.  I just got home and read the cryptic post he put up today and suspected the worst, in honor of its possibility.  He's my buddy and I don't want to see him unhappy, especially from a distance.  They've had a chopping block out behind the factory with his initials on it for so long that some questioned whether the C.S. stood for Cafe Selavy, Charlie Sheen, or Charles Starkweather.

Some even whispered C.S. Lewis....


Back when I used to frequent the factory, in the early nineteen-somethings, he was always getting into problems, always of a dissolute, debased nature.  He was unremarkable save for his unique ability to cause trouble and for his uncanny ability to keep witches un-singed from the match.  Now they might have turned on him.  I'm amazed that he ever got promoted to foreman in the first place.  When he first told me - well, I'll be honest - I was sure that he had said, foreskin.  But no, no, no, they actually made him a foreman.  It's an entire position of authority made out of the power of foreskin.  One more advancement and he would have been grandfathered in as... Rumpleforeskin, the pumpernickel poobah.
Oh, christ almighty. Stop.

No, we've known each other for almost three decades now and I shouldn't make jokes at his expense.  I shouldn't do anything at his expense, anymore.  Nobody should.  If things are as bad as I think they might be then this is even worse for each and all of us.  He is a person of genuine cultural output.  If what I suspect is happening actually is... well then, that output might be impeded.  At this I do greatly wince, without laughter, without schadenfreude, without jokes... without the smirk I wear as wit, as if.
I say these words only in the hopes of making him smile, if even for a moment.  I've looked up to him my entire adult life and even the greater portion of my teen years.  That, of course, will not change.  But life is all too often a cheap sham, propped up by fools or worse, sycophants, cheered by the leaders of the endlessly witless.

It's always nice to see a buddy get away with it for a while.

Even if I silently disapproved of his tilting at sandstorms.
You see, I have always been an advocate for moderation, speaking my quiet and humble truths patiently, while he is ever running off and afflicting himself onto others' troubles, stranger's bonfires.  Troubles with drugs, troubles with women, troubles with it all...  It beats all you ever saw, been in trouble with the law, since the day they was born.  Oops, that's just Waylon Jennings, a professional country wrestler from a bygone era of wayward gators,  jus' naturally sneaking his way into this conversation here, where he belongs.

He will, at least get that joke.  CS, I mean.  Fuck everybody else.

I have no actual current aspirations to communicate with the mighty Waylon...

Though my passionate prayers, often at either supper or sunrise, sunset or strippers, have often been described fondly as "Wailin'..." in nature.

And sometimes also as "Jennings."


A quick side note: I've always felt that Waylon Jennings could have been a Walt Disney.

Ok, I'm riding the spirits like a mechanical bull at in indoor :08 rodeo now.


CS'lavy has always published his blog "anonymously" and he derides me publicly for being so conspicuously noteworthy, and likable.  He calls me the "Paris Hilton of Sonoma," as if I would ever consider living on a farm without my dear friend Nicole Camille Richie....  But when I finally take his case to the highest court in this land then he will see me afresh as a "Mr. Smith flies from Washington" type.