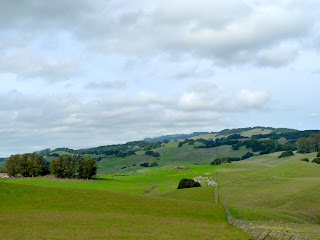 After a week the rains have finally gone.  Late yesterday and then again last night the remaining clouds departed.   There is the continued feeling that spring is here, even though it is still chilly in the mornings.  The drive across the river was pleasant and occurred without impediment from other drivers.  The Rolling Stones blaring me into my day.  The sense of opened skies and great spaces across the bay comes as a welcome relief after a week of perpetually damp grayness, or worse.
A single swan had returned to the pond where there were two before.  My friends and I developed competing theories as to what had happened to the other swan, or if this swan was even one of the two that were there before.  But this morning the single swan had moved on and a flock of smaller birds occupied the pond, just as they had before, presumably scaring off the swan with numbers.
There have been sheep occupying various vineyards and farms in the valley. They flock together in the rains and the darkness, separating in the sun, grazing and playing, then returning together almost as a single animal for the nights and the wet weather.  One flock has made their way high up on a hill near where our little road leaving the valley meets the highway.
They are up there, visible from a distance as a single unexplained event.  A white mystery surrounded by great greenness.   I keep wanting to walk up the hill to where they are, to see the bay and the valley from that great height.  I've often thought of hiking this particular hill.  It is inviting, though I suspect its owner may not be, especially as it pertains to strangers on his land, approaching his stock.  I envision buckshot flying over my head, or towards it.  But I envision other things to.  Like getting a puppy.
We are on the verge of owning a place.  Once we are told that we can have a puppy there then the search for one might begin, perhaps a cat also, some fish, spiders, and a large Amazonian snake of some sort, to keep the cat on its toes.  Though this search, and the biological width of it, is still somewhat dependent on Rachel's approval.  Many of the things that we could not have had as easily in New York we might now have: a small garden, pets, a barbecue grille, cars, parking spots, traffic tickets, oil changes...  little things that others might take for granted.
We were offered a baby grand piano. A gift which we have yet to claim.  The idea of having had a baby grand in my apartment in New York makes me giggle.  An east village apartment full of puppies and a baby grand occupying the place, without explanation how it got there, or how it would ever find its way out. 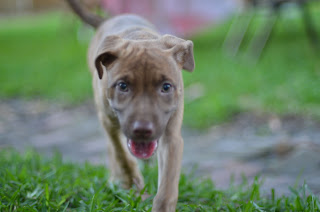