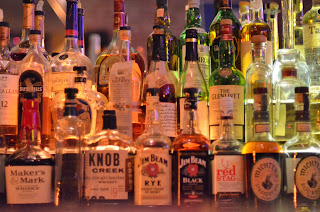 My dreams are off.  Terrible, frustrated and unsettled.  Last night I was back in New York and it had changed.  My neighborhood-new-york had shifted.  My little portion of the city was gone.
Two days ago I called an old friend at the bar she owns in the east village.  A pleasant man answered the phone, I forget his name, and explained that he and Anne (my friend) were now partners.  He went on to explain that he had known Anne and Bob (who passed away) for about 35 years.  He took a message and told me that he was busy but that he would pass the message on.  It was like meeting my mom's new boyfriend and then being dismissed by him.
In the dream last night I tried to call the bar and he hung up on me twice.  I showed up at the bar and kept dialing the number and watched him hanging up on me.  The bar had become a dirty pizzeria.  Anne was nowhere to be found.  I don't even think they served beer any more.  It was brightly lit with awful fluorescent lights and the windows had been closed off.  There was just tape and spackled plaster with cables hanging across like it was a construction job that had been perpetually abandoned.
In the dream I hadn't originally called the bar. I had called my friend Dwayne. Even though the phone was showing that I was calling Dwayne it was ringing the bar.  Some douche-bag sat in the corner eating a slice of pizza, giving me a Billy Bob Thornton type smile.  I mean, what is that, how does it end up in a dream?
I woke up.  My actual life had interfered with my dream life enough, I guess.  But it's the third day in a row that I've woken up with irksome dreams, visions of annoyance, strangeness.  It is not the thing one wants one's mind to be occupied with when not paying attention.  It leaves me with the feeling that my mind is not to be trusted, shouldn't be left alone at night, etc.  It leads the question each morning, what could be wrong?  I have a friend who will perhaps consult a psychic for me on the matter, where I will then let it lie.
"In the dream" is a funny phrase.  It is never, "When the dream was in me..."  It is always something that we are occupying, rather than being occupied by.  It does feel like the former first and then the latter upon waking. Yet we only speak of dreams once awake, once it is something that we have experienced.  Even when you speak in a dream rarely are you articulating those words in your sleep.  It is the mind telling stories to itself.  I suppose the phrase falls in line with "in the past" or "in my thoughts."  But dreams can occasionally be so much more foreign that either of those, as if it is something that briefly occupies you and then deserts you upon waking.
I read recently that 90% of your dreams are forgotten within an hour of having them, and when you relay them later they are only fictionalized tellings of the fiction of the dream.  So much so that  "psychic dream interpreters" have honed their talents to pick up on the subtle hints of your fears and desires based on the re-telling, the pauses, or the need to impress certain parts of the dream over others.  Psychic... the word is Greek in origin.
ESP: Economic Sensory Perception.
Ok, I hadn't meant to write so much about my dream from last night.  I had been thinking about writing about a friend's troubles but I'm not sure that it is appropriate to do so, even if written in a veiled way.  She feels unsettled and worries that she got married too young.  I sometimes think that I've done both, gotten married too young and then again, too old.  I think it's normal to feel that there might be another life waiting for you out there, that the couple's life you are living is a hindrance to your true self, that "too familiar" love is holding you back somehow.  Everybody must feel that way from time to time, but it is foolish to assume that happiness will be the result of causing such pain to others.  I assured her that occasional feelings of restlessness are quite normal, especially when you have herpes.
Jesus Christ! I was just looking for a picture to include with this post, thinking that the word "herpes" was as good a place to stop as any, then the dryer buzzer went off in the utility room, without warning.  It scared the shit out of me, well some of it anyway. Why the fuck aren't there volume controls on those things and why are they so fucking loud?  There should be a gentle warning buzz before the actual buzz, giving you time to prepare.  What, is everybody supposed to evacuate the house when the clothes are done?  I'm surprised that Brinks hasn't offered to install a system to have the police drive by and check whenever your t-shirts are unwrinkled.
.
Posted by Sean Q6 at 11:15 AM