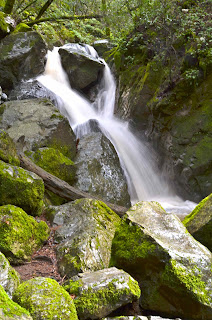 I'm torn between writing about Madonna being an advocate for ecstasy at the Ultra music festival or the Supreme Court's considering oral arguments against the individual mandate of "Obamacare"...  Since I don't know that much about either I'll opt for writing about my hatred for 10% of the people who live in Marin County.

No, I feel like I've already done that.  I have jotted down a few notes to further elucidate, but I suppose I'm just not in the mood for it today. I've tired of my writing of melancholy, and my pictures of flowers, which has been partly parody, part hyperbole, part joke, part truth.  But the intended audience didn't seem to get it, or care.  One must be careful when writing about one's feelings once you have a child.  Depression is no longer an acceptable admission.  It worries the minds of those who love me.  Though oddly it does so much more now than it did before.


My friend, Lisa, took me on a hike the other day. She wanted to get me out of the house, to save me from said depression. We went up to Sugarloaf and hiked the stream up to the waterfall, then we hiked the other direction up the side of the mountain, in search of a mythical tree she had once seen.  The mud and the steepness of the trail eventually forced us to turn around, partially victorious. We got a very nice view of the summit high above us and we saw a sign that marks the trailhead that leads up to the Ferguson observatory. 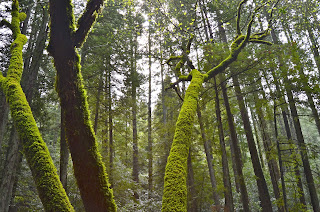 We stopped just a few hundred paces beyond the clearing below, where the decision was made that further hiking involved greater risk of encountering steep muddy trails. Our shoes and the bottoms of our pants were already covered in fresh mud, much of it seeping through my thin Japanese Adidas trainers.  The soles of my shoes were never meant for hiking and they had been worn considerably smooth since I had gotten them several years before. There were some parts of the trail that made me feel like I was hiking with two slices of pizza on my feet, both facing downwards.  It brought a small measure of excitement to think that at any moment $2000 worth of camera and lens could be destroyed in one small individually wrapped mudslide.

This small meadow seemed to sit between two larger peaks, both accessible by trail, though only with a continued effort that neither of us seemed eager to expend.  I was telling Lisa how a wide aperture setting determines focal length (below) and how shutter speed affects objects in motion and exposure (far above).  When speaking about photography I still feel that much of what I'm saying is being made up on the spot.  But when I went back after our hike and looked it all up I was surprised at how accidentally truthful I had been. 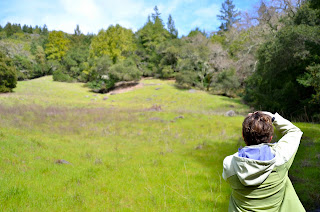 (Lisa, in focus, fuzzy field in the distance)

Once done with the trail I promptly drank a bottle of wine, partially filled a cyclist's water bottle with brandy, and headed off to work.  I had foolishly gotten my hopes up a little bit that I would be getting an award for service, recognition for dedication, something....  Silly me.  They don't reward people like me with anything so sacred as formal or informal gratitude.  Instead, I was told that no award had arrived, that perhaps it mistakenly got mailed to New York.  Seems possible, I suppose.  I mean, companies get things wrong all of the time.  They hired me.