... the gods wish to giggle 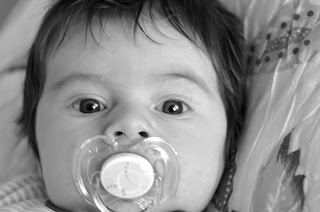 There is some speculation about my cryptic post last night.   It was mostly a nonsense fiction.  I started writing about doing something that I shouldn't, then that sounded like masturbation, then I just wrote whatever I felt next, then it stopped at a point that made sense, to me.  It was not about Burning Man, I promise.  Though I do think that Rhys is ready for Burning Man.  We want to accustom him to the concepts of human sacrifice asap.  We believe that there is very little more important for him to experience than the burning of a massive wooden effigy.
Well, not just yet.
I'm not sure if Burning Man is ready for another breast fed infant yet.  Though I have found little Rhys' crying to be almost psychedelic in the effect it has on me: fascinating, engaging and random.  It's almost beautiful at times, not quite lyrical, impossible not to notice, or respond to.  Unfiltered expression.  It has a very deeply fixed effect on me, even more so on Rachel.  Emotions are coursing through him so quickly now.  He will go from smiling to crying and back again in a matter of seconds.  I can only assume at both the depth and the range of any of his emotions, but as for their passing temporality I am certain.
I didn't see it but Rachel told me that he rolled over this morning.  He was in "tummy time" and apparently he worked himself over.  I think that's a record (...!!!, for Z).   I'll have him doing pushups in no time, if I can remember how they're done. The kid's already catching up on me.  Who knows, maybe this year he'll take me to Burning Man.  If I can ever stop pooping my pants.
He has a very strict, "no turd in the trousers" policy.
.
Posted by Sean Q6 at 10:26 AM